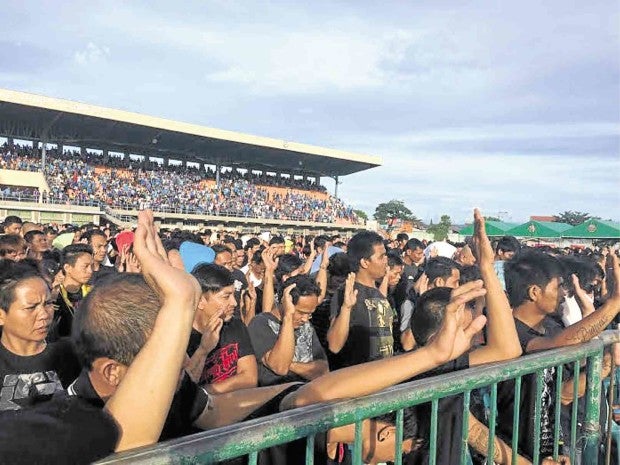 More than 10,000 confessed drug dependents in Pampanga gather at a grandstand in the City of San Fernando last month, promising before local and police officials to reform and avoid illegal drugs. TONETTE T. OREJAS/Inquirer Central Luzon

Health officials on Thursday admitted the severe lack of rehabilitation centers for the hundreds of thousands of drug suspects who had been opting to surrender as the administration of President Rodrigo Duterte pursued its fierce war against drugs.

In a Senate hearing on the drug problem, Health Undersecretary Elmer Punzalan said there were only 44 drug rehabilitation centers across the country—just 15 of them public—now operating as throngs of drug dependents were coming forward to the police.

“It’s different this time. We call it an influx. Now, those surrendering are coming in by the thousands. Our rehabilitation centers are crowded,” Punzalan said, responding to lawmakers’ queries on the capacity of government to respond to the flood of surrenders.

He said a total of 600,000 drug dependents by far had surrendered since President Duterte waged his all-out war, of whom nine percent—or 54,000—were determined to be in need of confinement in a rehabilitation center.

This while the total number of rehabilitation centers in the country could only take care of 5,000 patients in all.

He said those deemed to be in need of rehabilitation out of the latest surrenders had yet to be confined.

Drug rehabilitation takes between six to 12 months, depending on the degree of addiction of drug users, according to the health official. He placed the success rate of rehabilitation at a low 24 percent in the case of marijuana and meth addicts, and about two percent higher if the other kinds of drugs were included.

The rest, he said, would go back to their old habits.

He said President Duterte has ordered the establishment of rehabilitation centers in military and police camps “where there is space.”

One is being planned to be built at Fort Magsaysay in Nueva Ecija as an “immediate response” to the dire need for a reformation facility for drug dependents.

During the hearing, Senators Risa Hontiveros and Nancy Binay zeroed in on the drug problem as a public health issue, calling for greater state support to rehabilitate drug dependents.

Sen. Vicente “Tito” Sotto has a pending bill to incorporate drug rehabilitation as part of regular benefits under the PhilHealth system./rga