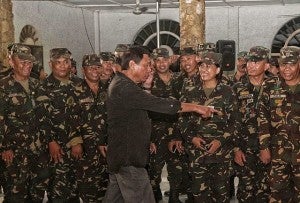 MANILA — President Duterte expressed on Wednesday, his condolences to the wife and son of Navy Petty Officer 3 Darwin Espallardo and assured them that the government would provide for their needs.

Espallardo was killed along with five other soldiers in an anti-drug operation against a man identified as Commander Madrox, whom Navy officials described as a “primary” drug dealer, in Barangay Nabalawag in Midsayap, North Cotabato.

President Duterte has announced that Cleofe Espallardo and 16-year-old Dwyndyll John Espallardo will receive P250,000 from the President’s Social Fund from where the burial expenses will also be settled.

Duterte also said that Espallardo’s teenage son would be given free college education, something that the President said should also be given to all the children of policemen and soldiers who were either killed or still alive.

Espallardo is the first Navy man killed in Duterte’s war against illegal drugs.

Asked to assess his first 50 days in office, Duterte said, “I would just say I’m trying my very best. I do not claim any great success. I am paid so I work. I got elected and I give the people what they want. They want a drug-free, graft-free government, they will get it.”  SFM