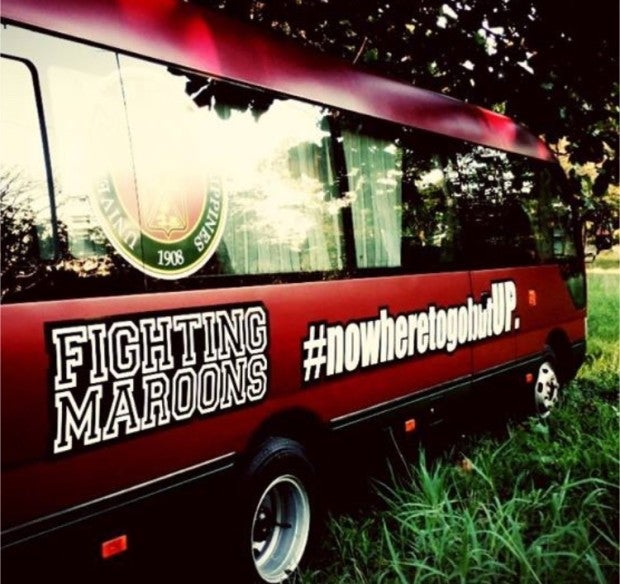 It’s no secret that the varsity players of the University of the Philippines (UP) are in dire need of financial support to improve their game, unlike their resource-rich counterparts in privately-owned colleges and universities who enjoy fabulous perks.

But all that may change as alumni of the nation’s premier university have joined hands to launch a nonprofit foundation that seeks to raise much-needed funds for the UP Maroons and the other UP Diliman-based university’s athletes.

The nowheretogobutUP Foundation is set to be formally launched on Saturday during a fundraising dinner at Ang Bahay ng Alumni in UP Diliman, Quezon City.

“What started out as an online advocacy campaign to help the UP Fighting Maroons has evolved over the past two years” into a full-blown movement to help varsity athletes, said former National Food Authority Administrator Renan Dalisay in a statement.

“We began as an informal group of concerned alumni pitching in to address the needs of UP’s basketball team and other sports teams, said Dalisay.

“As we learned about the extent of the needs of our athletes, it became apparent that we had to reach out to other alumni and find a means to make this effort more sustainable,” he said.

“After consultations with lawyers, fellow alumni, as well as those who are active in fundraising activities, we felt that putting up a foundation was the best way to go about helping UP support its athletes,” said Dalisay, who has been elected chairman of the foundation.

In attendance at the formal launch of nowheretogobutUP are university coaches and athletes, officials led by UP President Alfredo Pascual and UP Diliman Chancellor Michael Tan, and prominent alumni who have committed to helping improve their alma mater’s various sports program.

The highlight of the night will be the launch of the nowheretogobutUP official website, which will allow alumni from all over the world to donate to their favorite UP teams via PayPal or credit cards, as well as purchase team merchandise, the proceeds of which will all go to select varsity teams.
Facebook post
The beginnings of the foundation started with a Facebook post of Dalisay in March 2014.

Dalisay’s post narrated the struggles of the UP Men’s Basketball Team—the UP Fighting Maroons. His narration of the team’s sorry circumstances was accompanied by an impassioned plea to fellow alumni to reach out and help the victory-starved Maroons win at the annual University Athletic Association of the Philippines’ games.
Dalisay ended his call to action with a catchphrase that would become one of the UAAP’s most familiar hashtags: #nowheretogobutUP.

Since then the group has been instrumental in convincing other alumni to help improve the school’s athletic programs. The group has already donated a coaster and bus for the free use of athletes, with UP alumni like Azkals Manager Dan Palami and Philippine Basketball Association coach Bo Perasol agreeing to manage and coach UP Fighting Maroons, respectively.

TAGS: fundraising dinner, nowheretogobutUP Foundation, University of the Philippines (UP)