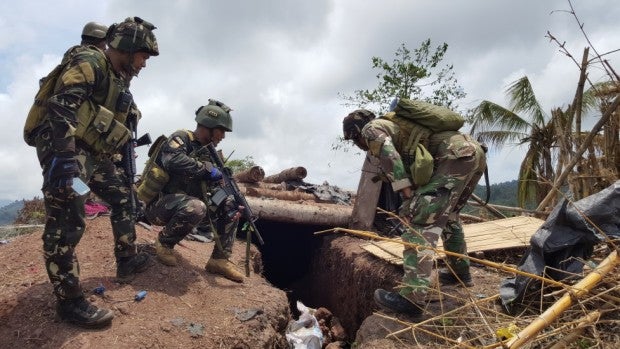 The Philippine Army’s Special Forces seized a known stronghold of the Abu Sayyaf Group in Basilan province in a series of military offensives on Monday afternoon.

On Sunday, combined troops from the Special Forces, Scout Ranger and Light Armor Cavalry troops, seized and controlled other strategic strongholds of the Abu Sayyaf in Barangay Baguindan and at Hill 440. It was fortified with seven foxholes, 12 bunkers capable of accommodating 80 persons.

Tan said the rebels were forced to abandon their stronghold after the assault with support from artillery fires.

Read Next
Duterte cancels Camp Tecson visit due to bad weather
EDITORS' PICK
High inflation: Your P1 is now worth only 87 centavos
UK’s Boris Johnson will resign, BBC reports
Geek out at TOYCON 2022 powered by Smart Signature
House energy committee chair Arroyo bats for cheap electricity
High-risk pregnancy: Reducing your risk is in your hands
Unemployment rate up to 6% in May
MOST READ
Suspect in grisly killing of missing woman in Bulacan arrested
Hong Kong suspends flight bans as it eases COVID-19 rules
Bongbong Marcos’ first order: Abolish PACC, Office of Cabinet Secretary
Kim Atienza’s daughter flaunts bikini body in response to critics of her ‘revealing photos’
Don't miss out on the latest news and information.