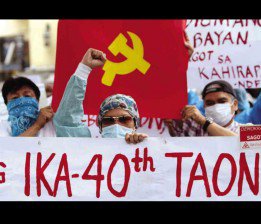 Members of the leftist National Democratic Front of the Philippines rally in Metro Manila. INQUIRER FILE

The Taguig City Regional Trial Court on Monday granted temporary liberty to three consultants of the National Democratic Front of the Philippines (NDFP) who will participate in the resumption of peace talks in Oslo, Norway.

Tirso Alcantara, Alan Jasminez and Ernesto Lorenzo were allowed to post bail of P100,000 in an omnibus order of the Taguig RTC Branch 271.

The court noted that the Office of the Prosecutor agreed to their release as the peace process is among the key programs of President Duterte.
The conditions for the provisional release include the P100,000 bail, cancellation of the bond after the peace talks and a pledge to return after the estimated six months of the peace process.

The government peace panel, through the Office of the Solicitor General, sought the conditional release of the detained NDFP consultants through the Supreme Court. The high court, however, said the regional trial courts handling their cases should hear the motions for release.

“Since public prosecutors and the Solicitor General did not object, we expect all the other courts to issue today similar orders granting said motions so that the travel documents of the consultants can be processed immediately,” Karapatan secretary general Cristina Palabay said in a statement.

“We hope all of them will be released starting (Tuesday) and that all other local courts immediately grant the motions and issue orders of release on bail. The participation of the consultants for National Democratic Front of the Philippines is crucial to the formal peace talks,” Palabay said./rga