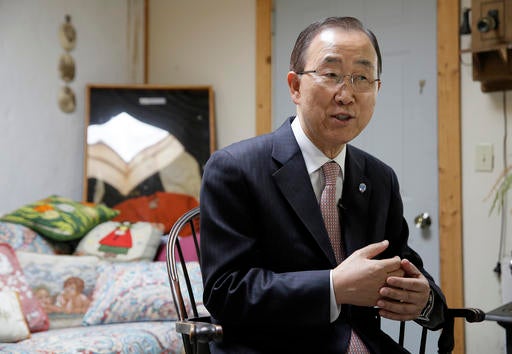 In this photo taken Aug. 11, 2016, U.N. Secretary-General Ban Ki-moon sits during an interview in Novato, Calif. During the interview he said he would personally like to see a woman become the next secretary-general of the United Nations for the first time since it was established more than 70 years ago. AP Photo

UNITED NATIONS— Secretary-General Ban Ki-moon says he would personally like to see a woman lead the United Nations for the first time since it was established more than 70 years ago.

As he nears the end of his second five-year term on Dec. 31, Ban said that “it’s high time now” for a female secretary-general after eight men at the helm of the world organization.

There are currently 11 candidates vying to succeed Ban — six men and five women.

But he stressed that the decision isn’t up to him — it’s up to the 15-member Security Council which must recommend a candidate to the 193-member General Assembly for its approval.

The U.N. chief was asked about the possibility of a female secretary-general during a trip to California last week.

Sitting onstage in Los Angeles last Wednesday with U.S. Rep. Ed Royce, a California Republican who chairs the House Foreign Affairs Committee, Ban stressed that women comprise half the world’s population and should be empowered and “given equal opportunities.”

“We have many distinguished and eminent women leaders in national governments or other organizations or even business communities, political communities, and cultural and every aspect of our life,” he said a day later in an Associated Press interview. “There’s no reason why not in the United Nations.”

Without giving any names, he said, there are “many distinguished, motivated women leaders who can really change this world, who can actively engage with the other leaders of the world.”

“So that’s my humble suggestion, but that’s up to member states,” Ban said in the AP interview last Thursday during a visit to the home of 99-year-old Libba Patterson in Novato where he spent his first days in the United States as an 18-year-old student from South Korea.

He praised the General Assembly for holding the first-ever public hearings for all the candidates seeking to succeed him.

By tradition, the job of secretary-general has rotated among regions of the world. Officials from Asia, Africa, Latin America and Western Europe have all held the world’s top diplomatic post. East European nations, including Russia, argue that they have never had a secretary-general and it is their turn. A group of 56 nations are campaigning for the first female U.N. chief.

The Security Council has held two informal polls in which 12 candidates participated, and in each the highest-ranked woman was in third place, a disappointment to many. Former Portuguese Prime Minister Antonio Guterres, a former U.N. refugee chief, topped both polls.

BACKSTORY: UN to hold informal poll on 12 candidates for next UN chief

In the first “straw” poll Irina Bokova of Bulgaria, who heads the U.N. Educational, Scientific and Cultural Organization, came in third but in the second she dropped to fifth. In the second poll Argentina’s Foreign Minister Susana Malcorra, who was Ban’s former chief of staff, moved up to third. Former Croatian Foreign Minister Vesna Pusic, who placed last in the first poll, dropped out of the race.

The Security Council has scheduled another “straw” poll on Aug. 29 and at least one, and possibly two, are expected to be held in September.

There is no deadline for nominations and two women mentioned as long-shot late entries are German Chancellor Angela Merkel and Kristalina Georgieva, another Bulgarian who is the European Commission’s budget chief and a former top World Bank official.

Ban spoke of the qualities he thinks are important for “any secretary-general, he or she.”

The prospective secretary-general should have “a clear vision for the world of the future” and “strong integrity and commitment” to make progress toward peace and promote development and human rights, he said, and the ability to tackle seemingly intractable issues through inclusive dialogue and with flexibility.

His successor should also have “strong compassionate and visionary leadership” and be able to articulate the importance of human dignity for vulnerable groups including women and girls, the disabled and “people in homosexual orientations and minority groups,” Ban said.

“If not the United Nations, who will take care of those people?,” he asked.

Head of UN Women: No country has reached gender equality