President submits P3.35T budget, says it is about serving and securing public, winning back trust, caring for poor and marginalized
By: Marlon Ramos - Reporter / @MRamosINQ
Philippine Daily Inquirer / 06:12 AM August 16, 2016 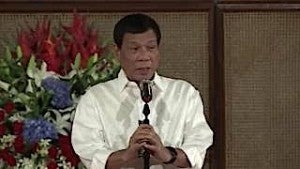 MANILA — President Duterte reminded Congress, on Monday, about the government’s responsibility to ensure the delivery of basic services to the people as the Department of Budget and Management (DBM) submitted his administration’s proposed P3.35 trillion budget for 2017.

In his budget message to the 17th Congress, the President reiterated the importance of curbing corruption in the bureaucracy to win back public trust.

He also urged the lawmakers to do away with the “mindset that the power and resources of the offices we occupy are ours to enjoy.”

“I was elected to bring forth real change in the government… Real change, as I said, begins with us and in us,” Mr. Duterte said.

“We must remind ourselves of this basic principle: Our people, through their taxes, provide the lifeblood of the government. They are the reason for government’s very existence,” he said. “Our people expect no less from us.”

Mr. Duterte acknowledged that bringing change would not be an easy task and that the three co-equal branches of the government should work closely together for the people.

“The bureaucracy,” he said, “must move to effectively implement programs that benefit the poorest.”

The President said the judiciary should move “swiftly” in implementing the rule of law while Congress should enact laws and “scrutinize the budget with the interests of the marginalized in mind.”

He said the existence of crime and corruption in the society has been proof of the erosion of public trust, which has greatly affected the lives of the “poorest and most vulnerable among our people.”

“As I emphasized in my inaugural speech, the core problem that we must confront is the erosion of faith in the government,” the President said.

“To whom else can they run if the government cannot guarantee their most basic right to safety? How can we make them believe that the government exists for their sake if they do not get the services they need?” he asked.  SFM