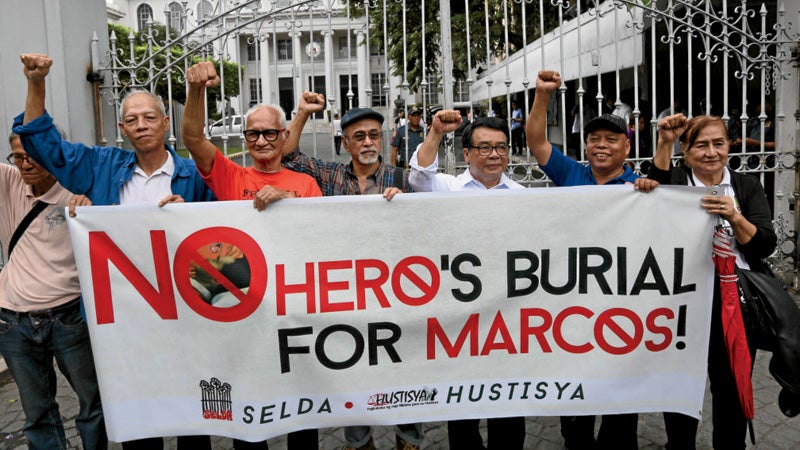 BURYING an “iconic dictator and outstanding tyrant” where only heroes lie is against the Constitution and the law.

Martial law victims asserted this on Monday in a petition filed in the Supreme Court to stop the burial of  Ferdinand Marcos at Libingan ng mga Bayani.

President Duterte had authorized the interment in a bid to put a closure on an issue dividing the nation since the return of the dictator’s remains in 1993, three years after he died while in exile in Hawaii following his ouster in the Edsa  People Power Revolution in 1986.

His remains are in a refrigerated crypt in the family mausoleum in Batac, Ilocos Norte province.

In a 30-page petition, 11 victims of human violations during Marcos’ military  rule asked the high court to nullify orders from the defense department and the military allowing his burial in the Taguig City cemetery “for being illegal and contrary to law, public policy, morals and justice.”

“The interment of Marcos at Libingan ng mga Bayani will send a cynical and odious message that Marcos is a hero and directly distorts the historical fact that he committed plunder and human rights violations during martial law thereby portraying human rights violations victims as liars for besmirching Marcos’ reputation as a hero,” the petition said.

It said the burial “with the honors that supposedly befit only Filipino heroes with overall unblemished integrity and dignity contravened  to the Constitution.”

The petitioners said the burial would betray the country’s stand against corrupt and dishonest governance, as it would mean Marcos, “after his removal from power, can snatch respect and thereby rewrite not only history but his culpability via the back door of declaring and celebrating him a hero.”

The plea sought a temporary restraining order or preliminary injunction to stop the burial, which is being arranged to be held sometime after his 99th birth anniversary in September.

They said the burial “could affect the already difficult search for Marcos’ hidden wealth,” estimated to be between $5 billion and $10 billion, pending litigation on his martial law abuses and reparation claims of his victims.

The petitioners said the respondents committed grave abuse of discretion amounting to lack or excess of jurisdiction.

Mr. Duterte was not named in the petition given his immunity from suit. He is known to be close to the Marcos family as his late father, Vicente, served in the Marcos Cabinet.

In their plea, the petitioners said Marcos’ interment at Libingan would violate the fundamental law, military regulations and the family’s 1992 agreement with the administration of then President Fidel Ramos on the dictator’s burial in his home province.

For one, Republic Act No. 289, the law providing for the construction of a national pantheon for Philippine Presidents, national heroes and patriots, says the hallowed burial site is reserved for leaders “for the inspiration and emulation of this generation and of generations still unborn.”

The petitioners said a hero’s burial for Marcos  “simply mocks and taunts” this provision, even granted that military guidelines on burials at Libingan ng mga Bayani allows Marcos’ interment being a former President and ex-soldier.

The burial would also violate RA 10368, the Human Rights Victims Reparation and Recognition Act of 2013, which recognizes Marcos’ crimes.

Marcos’ sins—more than 50,000 arrested, thousands tortured, slain and disappeared just in the first three years of the dictatorship—should “never be forgotten,” the plea said.

It also cited Marcos’ shady military record, a basis for the claim of his right to be buried at the state cemetery, as shown by a recent study by the National Historical Commission of the Philippines.

“Marcos’ incredulous claim of being a World War II hero and bemedalled soldier failed to pass the test of historical verification,” the petition read.

The 1992 agreement between the Marcos family and Ramos “does not bind” Mr. Duterte, his chief legal counsel, Salvador Panelo, said on Monday, repeating what the President had said in a news conference last week.

“The circumstance is different now because we have given the authority to the President to bury the late President Marcos. And that authority is predicated on the overwhelming landslide win by him,” he said, noting that Mr. Duterte had repeatedly said that he would allow the internment of the deposed strongman at Libingan.

Panelo said the agreement was considered “superseded” by the President’s decision to allow the Marcos burial despite the opposition of martial law victims.

“In effect, when he became President and pursued his promise, he’s in fact amending that agreement,” Panelo explained. With a report from Marlon Ramos