SEN. LEILA de Lima on Monday said she had witnesses who could testify against police “scalawags” allegedly behind the summary executions of suspected drug dealers to cover up their involvement in the narcotics trade.

In an open letter in Filipino, De Lima urged Mr. Duterte “to follow the inquiry” of the Senate committee on justice and human rights set to begin on Monday that would detail her allegations against certain officials of the Philippine National Police.

“There is an indication that not all drug suspects are really related to, but that they just coincided with, the campaign against drugs,” she said.

“There are deaths that are being done by corrupt officials and their cohorts to cover up their heinous participation in the drug trade. They are not pushing forward, and are instead diverting, the direction of the fight against drugs and sabotaging the good intentions of the campaign,” she added.

In an interview with the Inquirer, De Lima said the witnesses would include relatives of some of those killed in police operations.

One of the “strong” emerging theories, she said, was that police officers involved in drugs were themselves cleaning out those who could spill their dirt, possibly through hiring vigilantes.

“It’s a very strong theory based on what we have,” she said. 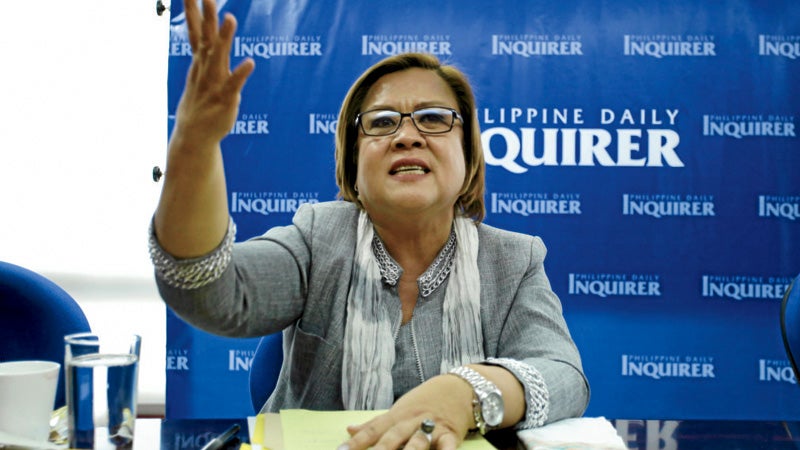 DE LIMA: They may be cleaning out through vigilantes those who could spill their dirt. KIMBERLY DELA CRUZ

She said her committee had already started sending summons to resource persons for the inquiry, among them PNP Director General Ronald “Bato” dela Rosa.

“I really want them to listen to our witnesses, if they have not investigated these cases,” De Lima said.

She said she chose to hear the witnesses first in the inquiry “to set the right tone.”

“These are the families, the loved ones of the victims. They’re the ones directly affected,” she said.

The witnesses are under the care and protection of the CHR, she said.

De Lima has so far scheduled hearings for Aug. 22 and 23, but expects that more hearing dates would be needed.

“Some of my colleagues (in the Senate) are of the assumption that the PNP can do no wrong as an institution. But I’m against the bad eggs of the institution, against the scalawags,” De Lima told Inquirer editors and reporters in a roundtable interview on Monday.

She said she felt “undercurrents” of efforts to stop her inquiry, including requirements that her committee first “produce complaints and evidence.”

“But I’m not a court of law. This is just an inquiry, and therefore the technical rules of evidence do not apply. Why all of a sudden in all the inquiries all these years they are imposing so many requirements?” De Lima said.

Sen. Alan Peter Cayetano, Mr. Duterte’s defeated running mate in the May elections, had earlier made his opposition to the inquiry explicit, saying it was a premature indictment of the entire PNP.

More than 700 deaths related to the drug war have been recorded since Mr. Duterte took office—a figure that has drawn calls from the international community for the new administration to respect human rights.

The President has himself several times threatened to “kill” drug traders if they continued to destroy the country.

De Lima, who had earlier vowed to serve as the “fiscalizer” of the Duterte administration, said in her letter that her inquiry was no different from the President’s “search for the root and extent” of the criminal trade.

“In ferreting out the truth, our goal is to ensure the success of the campaign against drugs and crime and in drafting the right laws and guidelines to help our law enforcers in the proper conduct of their duties,” she said.

During the last years of the Aquino administration, the drug problem escalated, affecting 99 percent of barangays in Metro Manila and 26 percent nationwide, according to the 2015 annual report of the Philippine Drug Enforcement Agency.