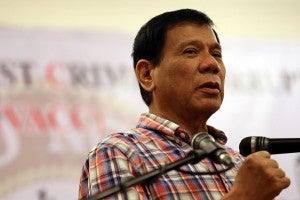 MANILA — An exasperated President Duterte threatened to unmask the “scalawags” in government who have refused to heed his call to stop corruption once and for all.

“I will really be harsh, double the word, in the coming days,” the President warned after swearing in new members of his administration in Malacañang on Monday (Aug. 15).

“It seems my appeal that this would be a clean government is not registering at all in the grey matter between the ears of some people in government,” he lamented.

The President said he already got the list of scalawags in government, which included more judges, more policemen mainly, and some politicians.

“I will really erase corruption. I will make… bad examples (of) them before the Filipino people. I hope you understand my sentiment. We all (want) good service for our nation,” he said.

He said he recently met with a group of businessmen from Cagayan de Oro City who complained of unbridled irregularities in the two government agencies.

He said Edgar Galvante, a retired police chief superintendent he designated as LTO chief, and lawyer Martin Delgra, whom he appointed as LTFRB chair, still could not contain the corruption in their agencies despite their “proven competence and integrity.”

Saying graft and corruption were already “endemic” in the bureaucracy, the President urged the new appointees to “help me clean the government.”

“Let’s work together. As I have said, for those who are working, you have nothing to worry about. I have the list of your troubles actually,” he said.

“I think there is a need really to purge (the government of corrupt officials),” he added. “I don’t want to transgress the rules or ignore due process… but it’s really difficult to get rid those who are already there.”  SFM