Man drowns as flood water sweeps away car in Cavite 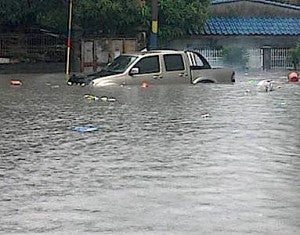 SAN PEDRO CITY — A man drowned after rampaging waters swept away his car at the height of monsoon rains in General Emilio Aguinaldo town in Cavite province on Sunday, a disaster response official said on Monday.

Vicente Tomazar, director of the Disaster Risk Reduction and Management Council (DRRMC) in Calabarzon (Cavite, Laguna, Batangas, Rizal, Quezon) region, said the victim and two other passengers were travelling along the Terapichi Bridge at 1 a.m.Sunday when their vehicle was swept away by flood water.

“The water level was already high but the victims went on and crossed the bridge,” Tomazar said, noting that reports that his office received indicated that the fatality, who was driving the car, was drunk.

He said the two passengers were able to jump out of the vehicle.