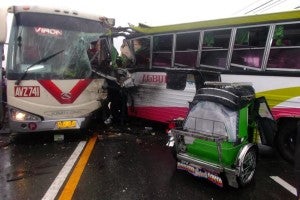 A south-bound mini bus collides, on Aug. 15, 2016, with a north-bound Viron bus on the bridge linking Villasis and Calasiao towns in Pangasinan province. A tricycle was hit along the way. (Photo courtesy of the Rosales Police Station)

DAGUPAN CITY, Pangasinan — A bus driver died and 20 others were injured in a collision, on Monday(Aug. 15), at the bridge linking the towns of Villasis and Rosales in Pangasinan province.

Reyes was taken to a hospital in Villasis town but a doctor there declared him dead on arrival.

The accident shut down both lanes of the Manila North Road, stalling north and south bound vehicles for hours.

Police said the mini-bus overtook a tricycle before it smashed into the Viron bus. The tricycle was caught in the middle of the collision, hurting its occupants Imelda Dungca, Leonila Laguna, Christian Laguna, Leonita Laguna, and its driver, Jerry Dungca.  SFM