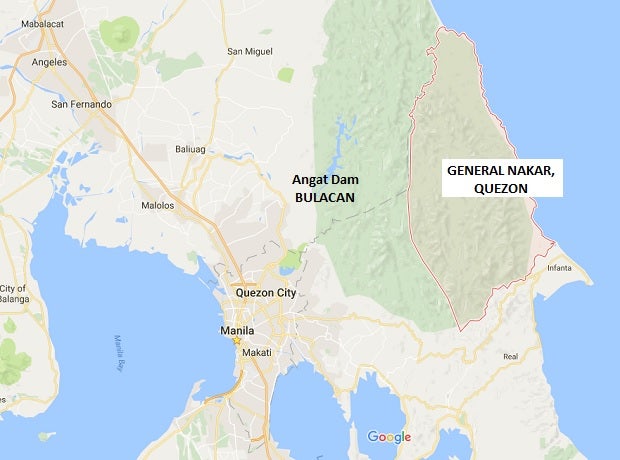 Flood spawned by recent heavy rain reportedly flooded a tunnel project of the MWSS in General Nakar, Quezon, killing one. Five are reportedly still missing inside the tunnel that would link the Sumag River with the Umiray-Angat Transbasin Tunnel in Bulacan. GOOGLE MAPS

LUCENA CITY, Philippines — A worker drowned while five others were reported missing after floodwater submerged a tunnel project of the Metropolitan Waterworks and Sewerage System (MWSS) in General Nakar town in Quezon province, a disaster response official said on Monday.

Buzar said a military report identified the five missing as David Guiagui Jr., Roland Sanchez, Danny Harnois, Simion Sig-Od and Ferdie Sanadan. They are believed trapped inside the tunnel being constructed to divert water from the Sumag River in Quezon to Angat Dam in Bulacan.

Astrera, in a telephone interview, said floodwater spawned by heavy rain swamped the project site, which is in the Sumag river portion between General Nakar town at the foot of the Sierra Madre mountain range and Donya Remedios Trinidad town in Bulacan.

The project involves the construction of a 600-meter tunnel that would be connected to the Umiray-Angat Transbasin Tunnel that leads to Angat Dam.

Astrera said the site could be reached after a five-hour boat ride followed by a five-hour trek from the General Nakar town center.

He said a rescue team from Philex Mining Corp. in Benguet had arrived to conduct search and rescue. The team is assisted by divers and Army soldiers./rga