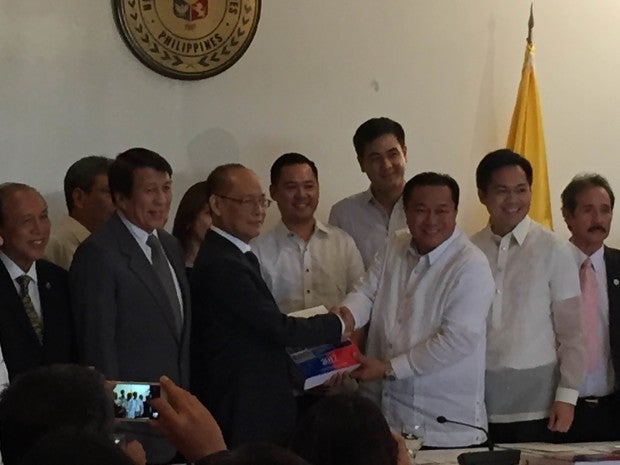 The Department of Budget and Management (DBM) on Monday submitted to Congress the proposed P3.35 trillion national budget for 2017, which seeks to cement the Duterte administration’s promise of change.

The proposed 2017 General Appropriations Act (GAA) was dubbed “a budget for real change.”

The 2017 proposed General Appropriations Act is 11.6 percent higher than the P3.002 trillion national budget this year.

The proposed budget also represents 20.4 percent of the Gross Domestic Product (GDP), higher than the 20.1 percent GDP share in 2016.

The government is also targeting a deficit three percent of the GDP or P478.1 billion, constituting the part of the government expenditure that could not be covered by the national budget.

According to sectors, the biggest share of the pie or 40 percent goes to social services under which P1.345 trillion was earmarked for social services such as education, culture, health, social security, housing, and land distribution, among others. This was an increase from the P1.12 trillion budget in 2016.

At least 27.58 percent or P923.954 billion of the pie was allocated to economic services, such as agriculture and agrarian reform, natural resources and environment, trade and industry, tourism, power and energy, communication, and roads and other transport, among others. This was an increase from the P834.029 billion budget in 2016.

At least 17.37 percent or P581.835 billion was earmarked for general public services such as general administration, and public order and safety, among others. This was an increase from the P497.975 billion budget in 2016.

At least 10 percent or P334.877 billion of the budget would go to debt servicing and interest payment, a decrease from the P392.797 billion budget for this purpose this year.

Diokno said the budget of the Philippine National Police (PNP) and the Armed Forces of the Philippines (AFP) was substantially increased to support the Duterte administration’s war on drugs, criminality and terrorism.

Diokno said the proposed budget for the PNP amounted to P110.4 billion, or 24.6 percent higher than its 2016 budget, for the national police force to hire more personnel, and purchase more guns and patrol vehicles to intensify its suppression of criminality.

Meanwhile, the proposed budget for the AFP is P130.6 billion, or 15 percent higher than the 2016 budget, to complement the AFP Modernization Program, under which P25 billion was allocated to better equip soldiers for counter terrorism.

Diokno also said the Duterte administration would seek an increase in the salaries of military and police officers through the passage of a law for a new tranche of salary standardization to increase the base pay of uniformed personnel and pension of retirees.

The administration would also fund the creation of more Halls of Justice and the implementation of the Enterprise Information System to de-clog the courts and dispose the backlog.

Diokno said the proposed budget for infrastructure is P860.7 billion or 13.8 percent higher than the budget in 2016.

The infrastructure outlay amounts to 5.4 percent of the GDP.

“(The budget) will allow us to address the backlog in public infrastructure and the needs of the Filipino people for higher spending for education and health, social welfare, and to address the requirements of the President to pursue peace and order and anti-drug policy in the Philippines,” Diokno said.

The Duterte administration has also proposed a P31.5 billion budget for the Mindanao Logistics Infrastructure Network, significantly higher than the current budget of P19.5 billion.

Diokno said it’s about time Mindanao gets a fair share of the budget, especially at the time when three of the highest officials in the country are from Mindanao: President Duterte, Senate President Koko Pimentel, and Speaker Pantaleon Alvarez.

The education sector remains to have the biggest budget among the sectors, with a proposed budget of P699.95 billion or 20.9 percent of the total budget.

The Department of Education (DepEd) was proposed to have a P570.4 billion budget, or 31 percent higher than the current budget. It also received the highest budget among the government agencies.

The DepEd budget includes the project for the P2.8 billion miscellaneous personnel benefits fund for the new teachers.

The DepEd budget also includes the implementation of the K to 12 program for the construction of 37,500 classrooms, hiring of 53,831 additional teachers, and the provision of assistance for 2.7 million students who would be diverted to private schools.

The proposed budget for state universities and colleges was higher by 18.3 percent at P58.8 billion, from the P49.7 billion budget this year.

The proposed P6.9 billion budget for Technical Education and Skills Development Authority would support 293,333 enrollees for the training for work scholarship program.

Also, the proposed P13.4 billion of the Commission on Higher Education would fund the expansion of its student financial assistance program and improvement of the K to 12 Transition Program.

The Duterte administration has also proposed a P120.5 billion budget for agriculture and agrarian reform, which includes the construction of farm to market roads, post-harvest facilities and other infrastructure projects, and the production and marketing of crops, fisheries and livestock.

The proposed P36.4 billion budget for the National Irrigation Authority would fund the rehabilitation of irrigation systems and subsidize the user’s fees that could be charged to poor farmers.

Meanwhile, the proposed budget for the health sector is P151.5 billion, of which P94 billion is allocated for the universal health program.

The proposed budget for the Department of Social Welfare and Development amounted to P129.9 billion, of which P78.7 billion is allocated for the Pantawid Pamilya Pilipino program (4Ps).

Under the 4Ps, at least P23.4 billion was earmarked for the provision of rice allowance for three million beneficiary families.

The Department of Labor and Employment was proposed to have a budget of P13.5 billion to support livelihood and employment programs.

To address affordable housing for the poor, the National Housing Authority was proposed to have P12.6 billion for socialized housing, particularly for the resettlement of informal settlers living in danger zones, as well as housing aid for calamity victims.

The Department of Transportation was proposed to have P7.3 billion for the resettlement of informal settler families which would be displaced by the North-South Railway project.

The Department of Energy on the other hand was proposed to have P1 billion for the electrification of 190,600 households in off-grid and on-grid areas.

The Department of Environment and Natural Resources was proposed to have a P29.4 billion budget, 32 percent higher than the current budget, to protect the country’s forests and reduce climate risks.

The administration also proposed a budget of P3.56 billion for the newly created Department of Information and Communications to address the slow internet speed and electronic-related crimes, and to mainstream the information and communications technology in schools.

The Department of Science and Technology was proposed to have a budget of P20.8 billion, 14.2 percent higher than the current budget.

Diokno said the budget of each department was based on the needs of each government agency.

Among the departments and special purpose allocations, the Duterte administration proposed the highest increase in budget allocation for ARMM, which saw its budget increase 42 percent to P41.782 billion from the current P29.41 billion.

Meanwhile, the budget for the judiciary also increased to P32.541 billion, from the current budget of P26.79 billion.

The budget for the Office of the President (OP) increased by a whopping 600 percent, to P20.03 billion from the current budget of P2.86 billion. But Diokno said this was because in the OP budget, at least P15 billion was earmarked for the conduct of the 50th Golden anniversary of the ASEAN next year.

(It’s really the OP’s budget but… Later on, when it’s approved, it depends on which agency will be spending. Right now, it’s lump sum to the Asean 50th anniversary; we are the hosts. It’s the golden anniversary so it’s quite big.) JE