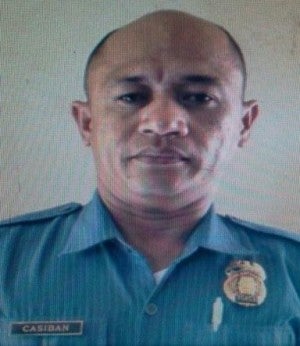 CEBU CITY— The blotter entries of PO2 Ryan Casiban of Cordova town in northern Cebu, may provide investigators with clues on his sudden disappearance and death.

Casiban wrote in his last blotter entries that retired police generals Vicente Loot and Marcelo Garbo “are the drug syndicate of the Philippines.”

He also made a last phone call to the former chief of the Cordova police, asking for help because another policeman had threatened his life and he wanted to turn himself in to President Duterte.

His widow, Chona, has called for an incisive probe to get at the truth and serve the ends of justice, adding her husband was not the type to kill himself. She lamented that her husband’s colleagues at the Cordova Police have considered the suicide angle.

Casiban left his post as desk officer of the police station in Cordova town, northern Cebu early morning of Wednesday (August 10) even if his duty was not yet over.

Two days later, his decomposing body was found on a vacant lot near a firing range in Lapu-Lapu City with a gunshot wound in the head.

Investigators have gotten hold of the entries he wrote in the police blotter before he disappeared last Aug. 10, which implicated two retired police generals in the illegal drugs trade.

Chona Casiban said she did not notice anything wrong on the evening of Aug. 9 when her husband bid her and their four young children goodbye because he was going to report for work.  But Ryan, 37, didn’t finish his shift.

At about 3 a.m. on Aug. 10, he casually walked out of the police station, bringing with him his government issued firearm, an M16 Armalite rifle and a government motorcycle.

Before he left the station, he wrote the blotter entries that accused retired police generals Vicente Loot and Marcelo Garbo of being involved in the illegal drugs trade.

His last entry in the blotter book read: “Gen. Garbo and Gen. Loot are drug syndicate of the Phils. Because of money protected by his men, PNP organization to stop illegal drugs.” He signed the entry above his name.

Another entry on page 153 read: “Gen Garbo and Gen. Loot drug syndicate of the Phils because of big drug money protected by his men PNP organization.”

On the same page, Ryan wrote blotter entry 0106, which read: “I want to write what is justice for all to stop all illegal drugs. God is in me.” He also signed the entry.

When reached for comment, Loot, now mayor of Daanbantayan town, told the Philippine Daily Inquirer on Sunday that he didn’t know Casiban and he never had a policeman by that name under his jurisdiction when he was with the Philippine National Police.

He added Casiban’s blotter entries were mere ramblings and did not directly implicate him in the illegal drugs trade.

Loot stressed that Casiban’s position in Cordova didn’t give him access to the intelligence report that reached President Duterte.

He lamented that he had been judged “guilty” even before he could prove his innocence, not in the courts, but in the media, which he said was unfair.

Loot and Garbo were among the five police generals named by President Duterte  as protectors of big-time drug lords.

Ryan reportedly sought the help of Jabas because  PO3 Jonathan Tajanlangit, another Cordova policeman, was allegedly threatening his life.

“Gi-hunting ko sa mga tawo ni Atan Tajanlangit, tabangi ko, sir, kay mo-surrender ko ni Duterte (I am being hunted by the men of Atan Tajanlangit. Help me, sir, because I want to surrender to [President] Duterte),” Casiban was quoted as having told Jabas.

But Medil and SPO2 Laurencio Wagwag, also a desk officer of the Cordova police,  said there was no open animosity between Casiban and Tajanlangit. They were “good friends,” said Medil.

Medil said Casiban had been assigned at the Cordova police for the last nine years. Most of his assignments were with the Alert Team.

Two days later, his body was found in the grassy area near the Wanderland Firing Range in Barangay Agus, Lapu-Lapu City.

Orlen Cantal, 33, a resident of Barangay Agus who was hunting for spiders with a friend when he found  the decomposing body.

The body was identified as that of the missing policeman based on the identification card found in the wallet.

The police also found his 9mm Glock pistol with three magazines and 23 live bullets, his mobile phone and a handcuff.

While his colleagues in Cordova suspected that he killed himself based on the bullet hole found in the right side of his head, PO3 Luisito Ernie, the Lapu-Lapu police homicide investigator,  said they would need the autopsy result to find out if there was foul play in Casiban’s death.  SFM