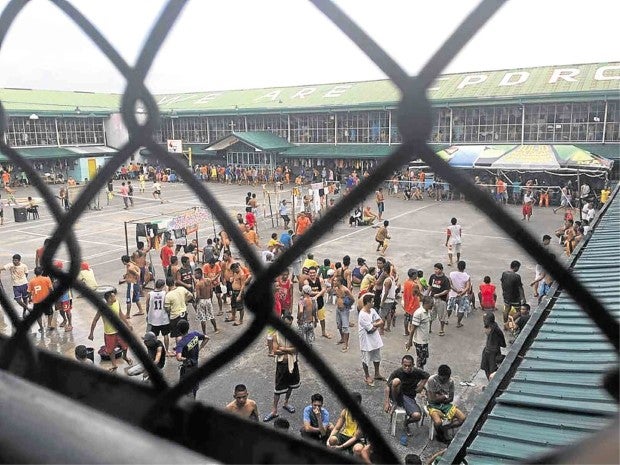 CEBU CITY—Inmates were sound asleep when they were roused by a loud thud and banging at the iron gates at 1:25 a.m. on Saturday.

Clad in full battle gear and armed with high-powered firearms, at least 300 policemen raided the male dormitories of the Cebu City Jail and the Cebu Provincial Detention and Rehabilitation Center (CPDRC), both located in the hilly village of Kalunasan, Cebu City.

Detainees were asked to remove their clothes and stay in one corner as operatives of the Special Weapons and Tactics Team (SWAT) searched the belongings and rooms of the two jail facilities one by one.

Talino said he immediately planned “Greyhound Operation” inside the Cebu City Jail as well as the nearby the CPDRC.

The police force was reinforced by agents of the Philippine Drug Enforcement Agency (PDEA) and Bureau of Jail Management and Penology.

Three K9 dogs from PDEA and the Philippine Coast Guard helped in searching for contraband.

According to Talino, “the jails have become a market for illegal drugs.”

“Drug users come here as if they would visit prisoners but in reality they buy and use drugs. They do it behind bars because they are afraid of the ‘Oplan Tokhang’ being conducted by the police out side the jail,” said Talino.

Talino said authorities are investigating how illegal drugs and other contraband were able to get past the jail guards at the entrance gates.

Charges would also be filed against the detainees who yielded drugs and contraband.

Like Calub, all jail officials and guards would also be investigated, said Iral who accompanied the policemen in raiding the Cebu City Jail.

Calub said he was grateful to the police for conducting the greyhound operation.

“During my administration, I never promised that there would be no illegal drugs inside the city jail. People always find ways to do it,” he said.

“The BJMP never tolerates that. But to be honest, we have a hard time preventing contraband from coming in. We could not avoid that,” he said.

But he said only two prison guards conduct a search of visitors.

“I’m willing to be relieved from my post and be investigated,” he said.

“But let me first give three recommendations. First, the government should give us an ideal facility. Second, there must be barriers in the visiting places so there would be no physical contact between the inmates and visitors. Lastly, there should only be one person handling the BJMP and the Bureau of Corrections so we won’t be confused,” he said.

Based on previous instances, Calub said female visitors bring packs of illegal drugs and hide them in their vaginas.

He said the jail’s 100 guards and staffers are not enough to monitor all visitors and inmates.

At present, the Cebu City Jail, which is designed for just 600 inmates, has 3,089 inmates.