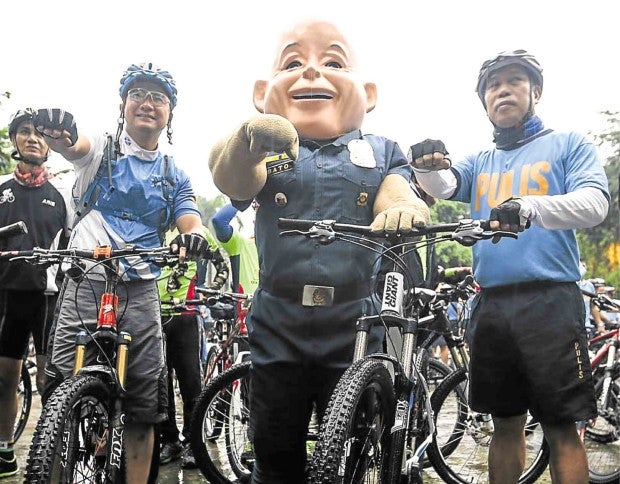 Despite the rains, around 200 policemen, nonuniformed personnel and volunteers organized by the Eastern Police District (EPD) pedaled their way through four cities on Saturday for “Bike for Change,” a campaign that apparently tries to promote a gentler side of the Duterte administration’s war on illegal drugs.

But a major part of the activity didn’t go as planned: No one showed up among the estimated 300 confessed drug users who earlier surrendered to the EPD under Oplan Tokhang and were expected to join the bike tour.

An EPD public relations officer, PO2 Catherine Capinpin, said the no-show participants probably thought the morning event got canceled because of the weather.

Still, despite being delayed by about an hour, the EPD-assembled bikers rode off starting from Pasig City Hall.

The four-hour tour took them through Pasig, Marikina, Mandaluyong and San Juan, where the bikers waved banners conveying warnings about the dangers of illegal drugs. Some parts of the itinerary were skipped due to street floods.

Also standing in for Dela Rosa was his mascot—”PO1 Bato”—who danced with the NCRPO Dance Fitness Team.

“Our bike (campaign) will spread awareness of our seriousness in the campaign against illegal drugs,” Sapitula said.

Despite the absence of the drug users, the EPD later issued a statement calling Saturday’s activity a success. 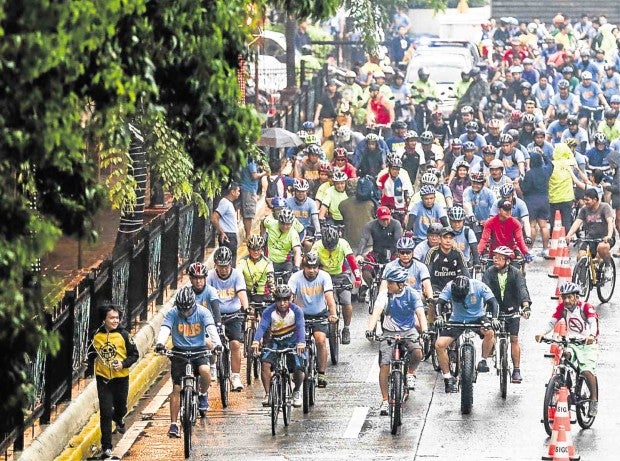 About 200 “Bike for Change” riders send their antidrug message across Pasig, Marikina, Mandaluyong and San Juan—the four cities under the jurisdiction of the Eastern Police District. LYN RILLON

Read Next
Deal: Marcos burial in Ilocos
EDITORS' PICK
More than 150 National Guard in Washington for Biden inauguration test positive for coronavirus
Is your company a growth champion? Stand up and be recognized!
New Year, New Rediscoveries
Acer Philippines welcomes you to its first flagship store
PNP’s Covid-19 cases jump to 9,809; 52 new infections logged
Pope Francis to miss events due to new flare up of leg pain—Vatican
MOST READ
Why Kris Aquino sleeps with her pearls
AFP to apologize to UP alum falsely included in list of NPA members — Lorenzana
Ellen DeGeneres, too, is baffled by viral Filipino soda ad
Dustin Poirier knocks out Conor McGregor at UFC 257
Don't miss out on the latest news and information.