Respite from killings in land of ‘drug lord’ 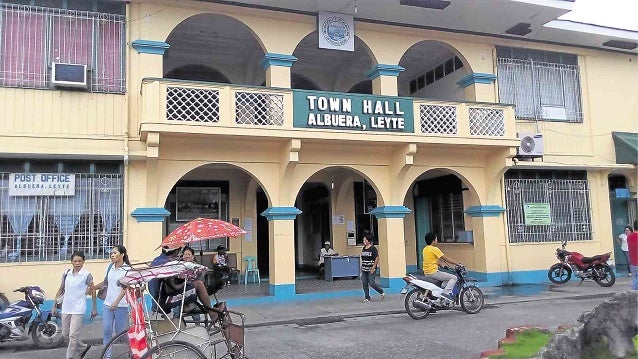 THE MUNICIPAL hall of Albuera town, Leyte province, does not betray the violent past that once defined life in the mainly agricultural town. JOEY GABIETA

For several years, the climate of fear had prevailed in this laid-back, agricultural town.

“Killings here had become normal. Every time a motorcycle with two men on board was speeding in an area, what followed was a report of a dead person,” said Protacio Macanay, a barangay councilor.

Residents knew what their mayor, Rolando Espinosa Sr., and his son, Kerwin, were capable of doing, even before President Duterte gave them 24 hours to surrender or be shot on sight as part of his avowed drive to rid the country of drug lords, pushers and abusers in the first six months of his administration.

For instance, during the last elections that Espinosa, a first-time candidate, won in May, at least 30 people supporting his three rivals were killed. Suspicions swirled that Espinosa’s family was involved in the deaths.

Kerwin, who has been tagged by police officials as the biggest drug lord in Eastern Visayas, had earlier threatened that “something” would happen to anyone who took over his seat.

Chief Supt. Elmer Beltejar, police director for Eastern Visayas, said murder charges were being prepared against the mayor in connection with the politically-related killings in the town during the May 9 polls.

Albuera, a third-class municipality of over 40,000 who depended on farming and fishing for their livelihood, was brought to national attention—and the Espinosas to national infamy—when the mayor showed up at the Philippine National Police headquarters in Camp Crame in Quezon City and surrendered to PNP Director General Ronald dela Rosa on Aug. 2.

The mayor denied protecting Kerwin and tearfully pleaded for his son, now the subject of a police manhunt, to surrender.

A day after, six of Kerwin’s armed goons were killed in a shoot-out with policemen outside his three-story house in Sitio Tinago, Barangay Benolho, in

Albuera. More than 30 firearms were recovered from them.

On July 28, the Espinosas’ two bodyguards and three employees were arrested in a police buy-bust operation just outside Kerwin’s house in Benolho. The two later accused the mayor of being involved in his son’s illegal drugs operation.

A 47-year-old neighbor of the Espinosa family in Sitio Tinago has disputed allegations that the mayor was involved in drug trafficking. “Whenever he was around, he would talk to us and engage us in conversations,” she said.

Tinago residents would usually receive food packs distributed by the Espinosas during Christmas. The mayor would open his house to them, especially on weekends, for a banquet and guests went home with P200 to P300 each.

Kerwin disappeared shortly after the May 9 polls. He gained notoriety in 2011 when he barged into the house of Andres Turtogo Jr., a district leader, and shot him and his two companions. He was charged with frustrated murder but was released on bail. The case is still pending.

Kerwin has also been linked to a series of killings believed to have been provoked by unpaid debts over “shabu” (methamphetamines) sales.

When he showed up at Camp Crame on Aug. 2, Espinosa wrote a letter designating the town’s first councilor as acting mayor and not Vice Mayor Rosa Meneses, who was not a party-mate. The councilor refused to take the job, citing rule of succession.

Meneses also did not want to assume the post, citing threats earlier made by Kerwin. But she took over on Aug. 5 after she warned by Ida Aquilina Lopez, local operations chief of the Department of the Interior and Local Government, that she could be charged with dereliction of duty.

Espinosa’s surrender was a “welcome respite for us,” said Macanay, 69. “We feel like our freedom has been restored. We can now move freely without fear that someone will be killed.”

A motorcycle driver, who asked to be identified only as Mike, said he rejoiced when he learned that Kerwin was being hunted down by the police. “We are so afraid of them. What he heard before, we just kept it to ourselves. Now at least we can openly discuss about him,” he said.

A market stall keeper, who also declined to be named, now has a sense of security. “Before, I have to close my store before 9 p.m. because of the presence of some suspicious men around. But now, the people here appear to be relaxed after his surrender,” she said.

Chief Insp. Jovie Espenido, the newly appointed Albuera police chief, assured residents that the town was now “peaceful” and that they were “secure.”