Victim's partner eyes suit vs cops after Duterte term: 'How can you have justice when the killings are blessed by President?'
By: Erika Sauler - Reporter / @erikaINQ
Philippine Daily Inquirer / 05:00 PM August 12, 2016 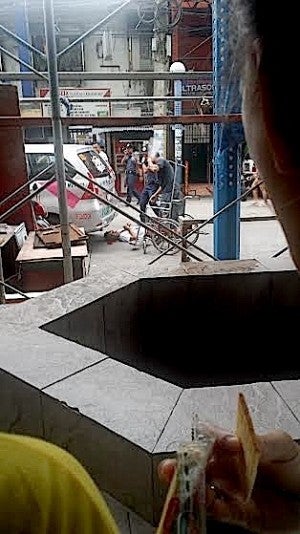 MANILA — A village chair being linked to the drug trade in Pasay City was killed by the police after he allegedly grabbed an officer’s gun while he was handcuffed.

This was according to the official report on the death of Edwin Ganan, 44, chairman of Barangay 29, Zone 5 in Pasay.  He was shot several times in the face and chest in front of the Pasay City General Hospital around 5:15 p.m. Wednesday.

But aside from questioning the report, Ganan’s common-law wife claimed that her partner got the worse end of a “palit-ulo” deal. The Filipino term literally means a head-swap, but its also street slang for a situation where an arrested criminal rats on a cohort in exchange for freedom.

In Ganan’s case, the alleged rat was a fellow Pasay resident who was earlier targeted in a buy-bust operation by the local police but managed to leave the neighborhood unharmed, Ganan’s partner, Nini Crisologo, said.

When the Philippine Daily Inquirer met her on Thursday, an anguished Crisologo said she would seek justice for Ganan — but only after six years, when President Duterte’s term has ended.

“Where can I find justice today when the killings have the blessing of the President?” Crisologo told the Inquirer, citing Duterte’s pronouncements that he would pardon cops involved in the killing of drug suspects.

According to Crisologo, Ganan went to the office of the Pasay police chief, Senior Supt. Nolasco Bathan, on Tuesday morning to clear his name after learning he had been tagged as a drug pusher. She said her partner did this upon the advice of Pasay Vice Mayor Boyet del Rosario.

She claimed that a buy-bust operation was conducted in the afternoon that same day at the house of another Barangay 29 resident, Victor del Mundo, on Propetarious Street, based on the information Ganan gave the police.

According to the police report on the operation, Ganan, who accompanied the police, gave two sachets of “shabu” to the undercover agents as proof and said he had bought the drug from Del Mundo.

But when Del Mundo was held for questioning, he reversed Ganan’s story and said the barangay chair had been the source of drugs in their area. Ganan, a former tenant in his house, tagged him as a pusher because of a longstanding grudge, Del Mundo purportedly told the police.

Ganan was later called back to the station, supposedly to sign papers relating to Del Mundo’s arrest, but he ended up being tagged as the suspect when he arrived, she said.

Crisologo admitted that Del Mundo and Ganan were indeed partners in the drug trade but that Ganan wanted to start a new life.

“Palit-ulo, that’s what happened” she alleged, noting that Del Mundo and his wife have since left the barangay after the operation.

Crisologo said the police had shown her a list of barangay officials involved in drugs, which included Ganan’s alias “Toto Manok.”

On Wednesday afternoon, hours after her partner was arrested, six officers in civilian clothes escorted him out of their headquarters for the mandatory medical checkup for detainees, Crisologo recalled.

As they boarded a patrol car going to the hospital, Ganan told her: “Mommy, please come with us.” His hands were then cuffed behind him the last time she saw him alive.

The police later reported that Ganan grabbed the gun of PO2 Clarence Maynes as they got off the vehicle in front of the hospital — and that the village chair was shot dead in the ensuing scuffle.

“Kap (Ganan) will not do that. He knows how to get along with people,” Crisologo stressed in the Inquirer interview. “They’re animals. The horns and tails of these policemen stretch out to the pits of hell.”

Last month, two other Pasay policemen were investigated over the death of two arrested drug suspects — Renato Bertes and his son Jaypee. Like in Ganan’s case, the Berteses were shot after Renato allegedly grabbed the gun of their police escort as they were being led into their cell on July 7.

After a two-week investigation, murder charges and an administrative complaint were recommended against the two officers, PO2 Alipio Balo Jr. and PO1 Michael Tomas.  SFM/rga