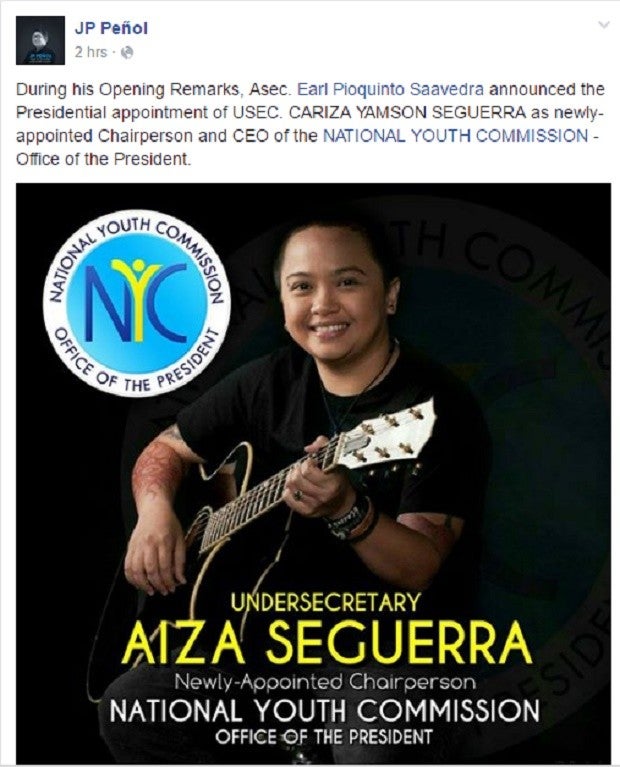 Malacañang on Friday announced the appointment of singer-actress Cariza “Aiza” Seguerra as chairperson of the National Youth Commission (NYC).

State-run PTV posted on its Twitter account that, “Aiza Seguerra is incoming Chairperson of the National Youth Commission (NYC).”

In an interview with CNN Philippines, Seguerra said her appointment papers were signed on August 8 and were given to her on Thursday.

She will officially assume the position of NYC chair on Tuesday.

Seguerra, who supported President Rodrigo Duterte during the 2016 elections, said she was “scared but excited.”

“This is a very big thing dahil kabataan ito at napakaraming sektor ang kailangang matuunan ng pansin (because we are dealing with the youth here and so many sectors need to be focused on),” she said.

The singer-songwriter said she will also use arts and culture to engage the Filipino youth.

Because she wanted to be more inclusive, Seguerra said she will visit the youth in Luzon, Visayas and Mindanao to learn more about the problems that they face.

She said she will focus on education and will carry her advocacy for the indigenous peoples.

Other issues that she would like to address are illegal drug use among the youth, teenage pregnancy and the spread of HIV/AIDS.

NYC, which is under the Office of the President, was established in 1995 as a policy-making body on youth affairs. CDG