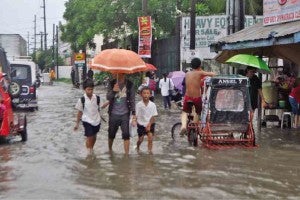 ILOILO CITY — An elderly man drowned in Janiuay town in Iloilo and several 60 families were evacuated in Antique and Iloilo City due days of heavy rains and strong winds.

Brasileno was on his way home and was crossing the river in Barangay Canawillian when he was carried by the strong current.

Classes were suspended in Iloilo City and 12 towns in Iloilo on Thursday due to the heavy rains and strong winds.

Iloilo City Major Jed Patrick Mabilog also ordered the suspension of classes in all levels in the city.

The OCD also reported that four families (one family in Simbalom town and three in San Remigio town) were evacuated on Wednesday but returned to their homes on Thursday.

Fifty-nine households were also briefly evacuated in Iloilo City on Wednesday due to flooding.

In Alimodian town in Iloilo, a house was damaged due to a landslide in Barangay Poblacion, according to Jerry Bionat, executive officer of the Provincial Disaster Risk Reduction and Management Office. SFM