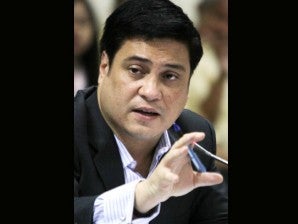 MANILA — Sen. Juan Miguel Zubiri has vowed to help ease doing business in the country through the streamlined processing of requirements— a step in pursuit of President Duterte’s promise to speed up government transactions.

Zubiri, chair of the Senate committee on trade, commerce and entrepreneurship, said he would push for amendments to the Anti-Red Tape Act of 2007 to put under one roof the mandate of issuing all permits related to doing business.

He also promised to strengthen penal provisions against government agencies unable to speed up processing of documents.

Zubiri made the commitment after meeting with Trade Secretary Ramon Lopez to discuss legislation that could help improve the country’s business climate as a means to stimulate the economy.

He cited the laborious process of getting requirements for business registration, such as clearances and permits from several agencies, including the Bureau of Internal Revenue, the Land Registration Authority, the Department of Environment and Natural Resources, the Department of Agrarian Reform and, even in some cases, the National Commission on Indigenous Peoples.

Zubiri said this process could be centralized under a “one-stop shop”: “We have to radically cut the steps and signatures required by asking all other departments to give up some steps and coordinate with each other more.”

His vice chair in the committee, Sen. Sherwin Gatchalian, cited how streamlining and automation helped prevent corruption in his native Valenzuela City, where he was long-time Mayor.

“Automating will eliminate corruption. Because the more human intervention, the greater the possibility of corruption. So it is very important to automate,” said Gatchalian.

He noted that 70 percent of local governments across the country have yet to automate transactions.

Lopez said that his fellow cabinet secretaries were all on board with the idea of streamlining permits and clearances processing: “The good thing there is I have been talking to all secretaries, and everybody is dancing to the same tune.”

“The champion is the President himself… If we ease doing business here, there will be more investors, employment will increase, so people’s income will increase, the value of property will increase… It’s really a virtuous cycle,” he said.

Zubiri is looking to introduce amendments to the Anti-Red Tape law within the year.  SFM/rga