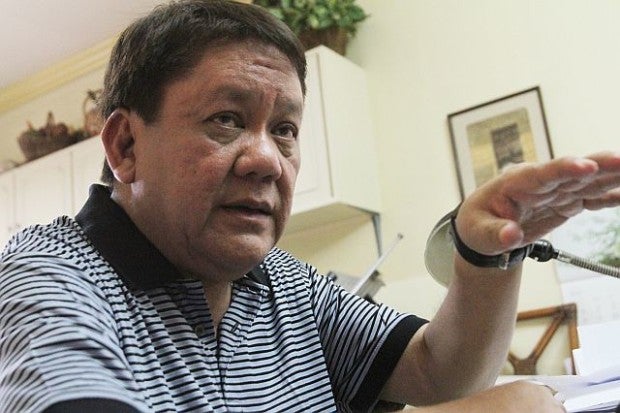 This after the National Police Commission en banc passed a resolution, taking back the authority of the mayor over the local police as deputized representative of the Napolcom.

The resolution, which was signed by Interior Secretary Ismael Sueño as Napolcom head on Aug. 10, was received by acting Cebu City Mayor Edgardo Labella on Wednesday.

Osmeña was on medical leave in the United States and was expected to be back on Aug. 14.

Section 64 of Republic Act 8551 or the Philippine National Police Reform and Reorganization Act of 1998 provides that governors and mayors are automatically deputized as representatives of the Napolcom in their respective jurisdiction.

Osmeña said that he withdrew support after the Philippine National Police transferred the two officials despite his request to let them stay for at least 30 days so as not to disrupt the momentum they were gaining in the fight against illegal drugs.

The mayor’s withdrawal of support to the newly installed policemen including new CCPO chief, Senior Supt. Joel Doria, cost him his authority over the police.

“He (Osmeña) has no longer operational supervision (and) control,” said lawyer Homer Mariano Cabaral, Napolcom Central Visayas director who served the resolution to Labella on Wednesday.

He said that as deputy of the Napolcom, the mayor had the authority to choose the chief of police as well as the power to impose disciplinary action on policemen assigned in his city.

No longer a Napolcom deputy, Osmeña lost such authority over the CCPO which would now be under the Police Regional Office in Central Visayas (PRO-7).

Labella said he was saddened by the Napolcom decision but the city would continue to collaborate and coordinate with the police.  SFM

Read Next
Mayor’s house yields drugs, guns during raid
EDITORS' PICK
Look Through: The fate of impounded stray dogs
House energy committee chair Arroyo bats for cheap electricity
What to watch out for when selecting a video surveillance solution
23,000 cops to be deployed nationwide for school reopening
Unleash the photographer in you this World Photography Day with vivo smartphones
DOH says COVID-19 cases plateauing, but public shouldn’t be ‘complacent’
MOST READ
Sharon Cuneta asks for prayers for friend in ICU who suffered silent stroke
Korina Sanchez reunites with former ABS-CBN co-anchors Julius Babao, Cheryl Cosim
Light therapy could be the answer to your sleep problems
Solons file resolutions seeking probe on ABS-CBN, TV5 merger
Don't miss out on the latest news and information.