‘Balulang’ goes back to school 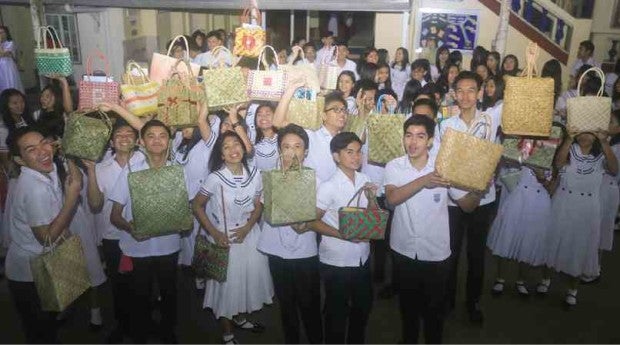 BACK TO BASICS Students of Lucban Academy lead a campaign to use the “balulang,” a native woven bag, to revive a tradition and help their community’s “zero plastic” drive. PHOTOS BY DELFIN T. MALLARI JR.

In the agricultural town of Lucban in Quezon province, a revival of past customs and traditions is making a cool comeback as the balulang (native woven bag made from pandan leaves) finds its way into schools.

At Lucban Academy (LA), the town’s oldest high school that was founded in 1947, the student council encourages the use of the native bag once every week, during “Balulang Monday.”

“We’re making headway. The students and even our teachers are interested,” said Ara Borines, 16, a Grade 11 student and the president of the student council.

Borines observed the trend on the use of native products like the balulang. “It’s not only practical but also cool. And it’s cute to carry around,” she said.

The revival on the use of balulang as schoolbag was one of her proposed projects when Borines ran for the council presidency. Her affinity with the native product started during her freshman year when one of her teachers encouraged the class to use it every Friday.

“And we’re getting extra points for using the bag,” she said.

Borines said she also wanted to promote the indigenous item for the everyday use of residents as communities slowly veer away from the use of plastic and other nonbiodegradable packaging.

Since 2009, the local government has been implementing a “zero-plastic Lucban” program through an ordinance that regulates the use and sale of plastic bags, and institutionalizing the use of biodegradable containers.

Borines noted that the practice of using native bags had long been part of the tradition of Lucban, which is nestled at the foot of Mt. Banahaw. “They were not only use as market bags by our elders but also as schoolbags,” she said.

Milada Valde, 72, a native and former president of the Quezon Tourism Council, recalled how they used it when she and her classmates were in high school at LA. “Our schoolbags back then were all made from native materials, most of them balulang,” she said.

“We attached colorful and attractive decors to make it chic and stylish. All the girls back then were into some sort of a fashion contest on who can make the most beautiful bag,” Valde said.

She praised the efforts of local students to resurrect the use of balulang. It is “very Lucbanin,” said the entrepreneur behind the successful Dealo Koffee Klatch, a popular bakeshop known for its special broas (toasted ladyfingers).

Valde said she would also use the native bags to pack gifts for her foreigner friends and business partners, especially those based abroad.

Though most of students in LA are still using the modern-day commercial bags, such as backpacks, those carrying balulang bags, especially boys, invite envious looks from fellow students. 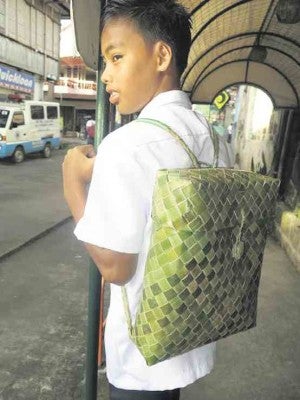 Just like the old times, the modern-day balulang bags are decorated with colorful ribbons, printed flowers made from cloth, painted with blazing neon colors, with straps to serve as backpacks and shoulder bags. The items are a moving canvass to express one’s wild and artistic imagination.

A balulang bag sells from P20 to P300 each, depending on the design. Dino Oliva, a caretaker of one of the outlets, said sales would peak during school opening.

Most of their balulang were made in nearby Luisiana town in Laguna province, where pandan weaving is one of the primary industries. Pandan leaves are also used to make hats and mats.

Borines said joining Balulang Monday was not mandatory among the 1,500 students of LA.

“We want them to voluntarily join the program as manifestation of their personal commitment to the revival of our tradition,” she said. “A true Lucbanin should be proud of our past especially our colorful and unique practices.”