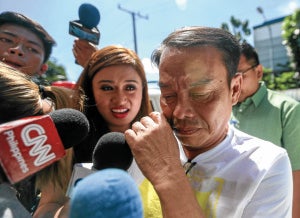 Instead, he accused the police led by Chief Insp. Jovie Espenido, Albuera police chief, of harassment.

“I am appealing to the President and to the Chief PNP (Philippine National Police) to order his men to stop these threats and harassment to my person and to the members of my family,” Espinosa said in a statement sent Wednesday night.

“I have always maintained my innocence on my knowledge of the illegal activities of my son. However, it seems that the authorities are using me to pressure my son, Kerwin, to surrender,” the statement added.

Espinosa has been confined in a hospital in Cebu City due to chest pains. His statement, however, did not indicate his whereabouts.

But Espinosa assured the PNP leadership he had no plans of leaving the country.

“I am assuring them that I will face the cases that will be filed against me. I have no plans of fleeing because I am innocent of all these charges and I still believe in the justice system that eventually will uphold my innocence,” said Espinosa in his statement.

Espinosa pointed out that he presented himself to Camp Crame even before the lapse of the 24-hour ultimatum issued by President Duterte for him and his son to surrender or a shoot-on-sight order would
be issued.

“I wanted to primarily and personally report to the Chief PNP, PDG (Police Director General) Rogelio dela Rosa the threats to my life made by PCI (Police Chief Insp.) Jovie Espenido, the Chief of Police of Albuera, Leyte. As a matter of fact, these threats can be verified from his interview with the local media in Ormoc City wherein PCI Espinido said that he would hang my head on the flagpole of the municipality,” said Espinosa’s statement.

He said that while at Camp Crame, he was made to sign sworn statement at the Criminal Investigation and Detection group (CIDG) and make a public appeal asking Kerwin to surrender.

Espinosa said that what he did “were substantial proofs of my full cooperation and commitment to the present administration in its quest to cleanse the country from illegal drugs.”

“When I left Camp Crame on August 5, 2016, General  Dela Rosa advised me to return to Albuera, Leyte, but I deem it not safe because of the continued harassment and threats made by PCI Espenido,”  he said in a statement.

Espinosa said Espenido led the August 3 raid on his residence in Albuera town, which led to the deaths of six men.

The police team also confiscated his vehicles and other personal properties “without legal grounds” during another operation held on August 7.

On Wednesday morning, Espenido and elements of the Philippine Drug Enforcement Agency (PDEA) reported the discovery of 11 kilos of shabu worth P88 million and bomb parts from his Albuera residence.

“As a consequence of all these, my personal properties inside my residence were looted by some individuals since my house was left unlocked and unguarded after police entered the premises,” said Espinosa’s statement.  SFM 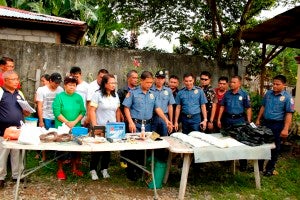 Police seized P88M worth of shabu inside the house of Albuera Mayor Rolando Espinosa Sr. of Leyte. (Photo by ROBERT DEJON/INQUIRER VISAYAS) 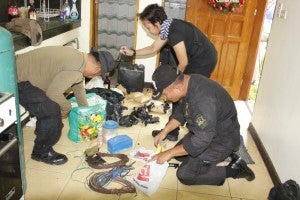 Aside from shabu, bomb-making materials were found by the police inside the house of Albuera Mayor Rolando Espinosa Sr. of Leyte. (Photo by ROBERT DEJON/INQUIRER VISAYAS)