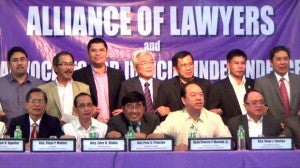 Members of the Integrated Bar of the Philippines. File Photo by RYAN LEAGOGO/INQUIRER.net

MANILA — The Integrated Bar of the Philippines (IBP) called for an immediate investigation of the summary killings of alleged drug pushers, saying abuse of authority in war against drugs “is equally criminal.”

In a statement, the IBP urged the Philippine National Police (PNP), Office of the Ombudsman and other law enforcement agencies to hold serious and credible investigation on the spate of killings in relation to President Duterte’s war on illegal drugs.

“It must not be forgotten that regardless of whether or not the victim is a drug offender, unjustified killing is murder nonetheless,” said the IBP statement on Wednesday.

The lawyers’ group said while law enforcers could use “deadly force” to defend themselves and innocent bystanders, “the abuse of authority is equally criminal.”

President Duterte on Tuesday dared Supreme Court Chief Justice Lourdes Sereno that he would be force to declare martial law if the latter would continue to interfere in the police’ war on drugs.

The high court on Tuesday asked Malacañang to file a complaint against four of the seven judges, since one of them was dead, second was retired and third, dismissed.

But an irate Duterte replied: “It’s my duty to let everybody know who is behind the drug problem.”

“You know Chief Justice, there was a slaughter going on, and mind you, you were appointed by the government there as chief justice at the time walang ginawa ang gobyerno (the government did not do anything) to fight the drug problem,” said Duterte in a speech Tuesday night at Camp Evangelista in Cagayan De Oro City.

Duterte said it would be difficult to wait for warrants of arrest when government would have to deal with millions of drug users and pushers.  As of the last count, Duterte said 600,000 users and pushers surrendered to police stations nationwide, out of fear that they would be next in the wave of killings of drug suspects.  Duterte said the government could presume that hundreds of thousands more have not surrendered as the latest estimate of the Philippine Drug Enforcement Agency put the number of drug users and pushers at around 3 million. “Maghingi ka ng warrant? (You will seek a warrant?) You must be joking.”

The IBP agrees with President Duterte’s claim that the drug menace has indeed reached “staggering proportions” and the reach across all classes in the society has been “shocking.”

The group lauded the Duterte administration’s serious resolve to the problem that has opened the eyes of many Filipinos to the extent of the menace.

But the lawyers said the Philippines has always been “a nation of laws and not of men.”  It should not abandon the foundation of democracy; rule of law should prevail, the IBP said.

“It is at times such as these, when the temptation to take extralegal measures is at its height, that our conviction to abide by this principle must likewise be at its strongest,” said the IBP statement.

The alarming spate of vigilante-style killings of suspected drug users and pushers, and the increasing number of deaths of drug suspects during buy-bust and arrest operations, deserves serious attention, according to the IBP.  SFM