Arroyo back at VMMC to donate dialysis machines 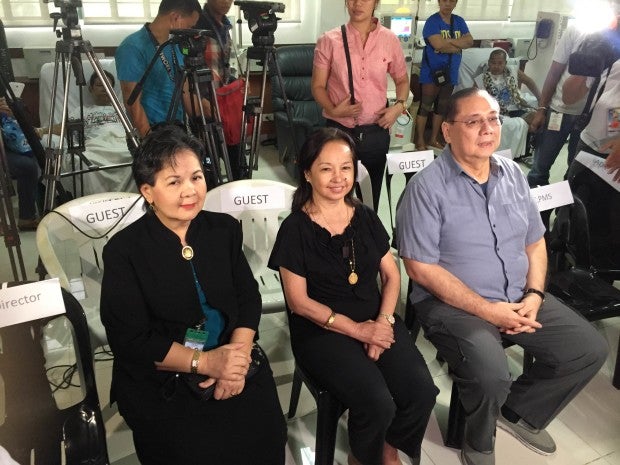 Former president now Pampanga lawmaker Gloria Arroyo donated dialysis equipment to the Renal Dialysis Unit of the Veterans Memorial Medical Center, where she was detained for four years for plunder until the Supreme Court dismissed the case. She was accompanied by her husband former First Gentleman Mike Arroyo. Photo by Marc Jayson Cayabyab, INQUIRER.net

Former President and now Pampanga Representative Gloria Macapagal-Arroyo is back at the Veterans Memorial Medical Center (VMMC) not as a detention prisoner, but a free woman who donated hospital equipment.

The turnover ceremony was held at the renal dialysis department noontime.

Arroyo and her husband signed the deed of donation during the turnover ceremony.

According to the deed, the Arroyos donated two units of dialysis machine and one unit of air-conditioning to the hospital.

The deed was signed by Arroyo as donor and VMMC Director Nona Legaspi as donee.

In his speech, Mr. Arroyo said it was a special day for the Arroyos on the day they donated the equipment to the VMMC.

“We became close to the administration of Veterans because GMA was incarcerated here,” Mr. Arroyo said.

His wife Gloria, who was seated on a monobloc chair in front, interjected: “But they treated me like a patient!”

He asked the doctors what else the hospital needed. “Do you need 10, 20 wheelchairs? Okay, we’ll give you 20 wheelchairs!” Mr. Arroyo said, receiving an applause from the audience composed of doctors, nurses and the sick elderly lying on hospital beds in the renal dialysis unit.

After the donation, Mrs. Arroyo went near two patients to shake their hands.

“I’m allowed to touch them, right?” Mrs. Arroyo said, laughing, careful not to infect the elderly.

The former president won a seat in the House as Pampanga congresswoman while in detention for plunder over the alleged misuse of P366 million in Philippine Charity Sweepstakes Office (PCSO) intelligence funds from 2008 to 2010.

She held office at the VMMC for the duration of the last Congress.

Arroyo walked free at 6:30 p.m. last July 22 after the Supreme Court dismissed her plunder case. The high court ruled that her approval of the P366 million intelligence fund releases were only ministerial and did not constitute an “overt act” to commit plunder.

On the other hand, her husband faces a graft trial before the Sandiganbayan Seventh Division for allegedly selling two secondhand helicopters to the Philippine National Police and passing them off as brand new in 2009.