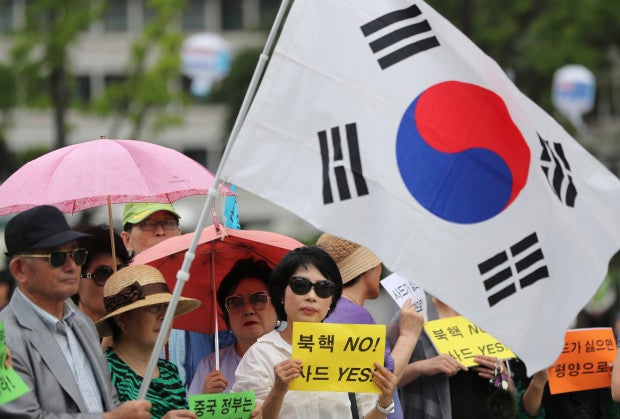 South Koreans hold signs and a national flag during a rally to support a plan to deploy an advanced U.S. missile defense system called Terminal High-Altitude Area Defense, or THAAD, in Seoul, South Korea, Monday, July 18, 2016. The advanced U.S. missile defense system will be deployed in a rural farming town in southeastern South Korea, Seoul officials announced Wednesday, July 13, angering not only North Korea and China but also local residents who fear potential health hazards that they believe the U.S. system might cause. The letters read “No, North Korea’s Nuclear and Yes, THAAD.” AP

BEIJING — Growing Chinese anger at South Korea over a US anti-missile defense system bodes ill for everything from pop star appearances to United Nations action against North Korea’s nuclear and missile threats.

South Korea’s mighty entertainment sector has been on edge since Beijing criticized Seoul’s decision last month to proceed with the Terminal High Altitude Area Defense, or THAAD, system, with reports of event cancellations and possible bans on South Korean TV series, amid scattered calls for a total boycott of imports from the South.

A chill has already descended over the political relationship, with Chinese state media employing its trademark searing rhetoric in daily screeds against South Korea and the US over the THAAD plans.

State outlets have even hinted that Beijing will stop future cooperation with the U.S. against North Korea at the United Nations Security Council. THAAD “has declared the death of that short-lived United Front,” the English-language China Daily said in a recent editorial. The Foreign Ministry did not respond directly to a faxed question about future UN sanctions cooperation, but said the Security Council’s resolutions on North Korean missile tests contained “clear rules.”

China had warned for months that a decision to deploy THAAD would deal a major blow to relations with South Korea. Beijing sees itself as the system’s true target, dismissing its ability to defend against North Korean short-range missiles while complaining that it would allow the US to peer up to 1,400 kilometers (870 miles) into China.

“If South Korea willfully deploys the system, there will be a larger impact on relations and in trade. Economic ties will inevitably get hurt because China considers the deployment as a hostile act, so how could it be possible to develop relations under these circumstances?” said Lu Chao, a Korea expert at the Liaoning Academy of Social Sciences in northeast China.

The U.S., which retains 28,500 troops in South Korea, says THAAD is a defensive system focused only on destroying any North Korean missiles targeting the South.

The rapid deterioration of relations is even more stunning given how cozy they were barely a year ago, when Park paid her Chinese counterpart Xi Jinping an enormous compliment by attending a September military parade in Beijing, the only head of state from a US ally to do so. That underscored a long-term effort by South Korea to walk a fine line of seeking both deeper trade and cultural ties with Beijing and a strengthened alliance with the US.

Cultural exports are a big deal to South Korea, and a prolonged downturn in the China market could have effects on other products.

According to the state-owned Korea Creative Content Agency, China including Hong Kong was the second-biggest importer of South Korean books, comics, music, video games, movies, animation and other content businesses, accounting for 24 percent of those types of exports at $189.99 million in 2014, the last year for which figures were available. North America was the biggest market, absorbing 29 percent of South Korea’s cultural exports that year.

While that’s a fraction of South Korea’s total exports to China, which totaled $145.3 billion in 2014, with South Korea enjoying a hefty surplus, the entertainment sector can have a heavy knock-on impact on the popularity of other South Korean goods, especially cosmetics, fashion, food, consumer electronics, smartphones and cars, as well as tourism.

What K-Pop stars wear, eat and use can exert a strong effect on Chinese consumers. Chinese tourists spend their time in South Korea visiting spots where popular K-drama series were filmed and buying Korean cosmetics that K-Pop stars use and eating local food that K-Pop stars enjoyed on screens.

President Park clearly knows the entertainment sector’s value to South Korea’s exports and tourism, as well as the broader economy.

“We live in an era when one drama can stimulate many industries and K-Pop could be an important trigger of our products,” Park said in April as the South Korean blockbuster TV series “Descendants of the Sun” was enjoying huge popularity in China.

Chinese consumer boycotts can be both spontaneous and directed from the top, with the government setting the tone and passing on suggestions or orders, usually verbally so as not to be traced. An editorial in the nationalistic tabloid Global Times, published by the Communist Party’s flagship People’s Daily, suggested both factors were in play.

The impact on cultural exports will only worsen if South Korea moves ahead with THAAD, the paper said. “By then, there will be no need for any official order, as TV stations broadcasting South Korean dramas will be resisted by Chinese netizens.”

South Korean officials are clearly worried about any economic retaliation, and last month the government designated one official from each economic affairs-related ministry to monitor any developments related to non-tariff barriers, such as official or unofficial bans.

The Chinese government and state media have also been eager to provide a platform for South Koreans who oppose THAAD, and Beijing this week hosted opposition South Korean lawmakers for a discussion on THAAD at Peking University.

Park criticized the lawmakers, saying they don’t understand the diplomatic efforts the government has been making. The implication that they were being used by China seemed have had an effect and the group canceled a planned news conference.

Beijing’s approach could backfire if it ends up alienating South Korean’s and driving their country into a stronger alliance with the US and China’s old nemesis Japan, but it is a risk China seems willing to take.

“Ultimately, South Korea will face China’s military counter-measures, since the Chines military will definitely not to let the situation develop without exerting control,” said the Liaoning Academy’s Lu.