US approves $1B tank, weapons sale to Saudi 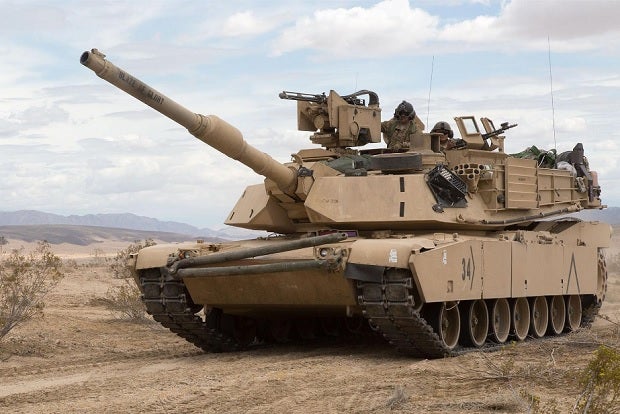 An M1A1 Abrams tank of the 3rd Armored Brigade Combat Team of the US Army 1st Armored Division train in Fort Irwin, California, in this photo taken April 10, 2016. The US has approved the sale of 153 M1A1s to Saudi Arabia, machine guns and military gear in a $1 billion arms deal. US ARMY PHOTO BY PFC. DANIEL PARROTT

WASHINGTON, United States — The United States has approved the possible sale to Saudi Arabia of up to 153 tanks, hundreds of machine guns and other military gear in a deal worth $1.15 billion, the Pentagon said Tuesday.

The announcement coincided with news that Saudi-led coalition warplanes had resumed air strikes on Yemen’s capital for the first time in three months, killing 14 people and shutting the airport after UN-brokered talks were suspended.

State Department spokeswoman Elizabeth Trudeau said she was “very concerned” by Tuesday’s casualty reports, but did not directly comment when asked if the State Department worried US weapons being sent to Saudi Arabia could be used against civilians.

“We regularly talk to our partners and our allies around the world. You know, civilian casualties are obviously of grave concern to us,” she said.

According to the Defense Security Cooperation Agency (DSCA), Riyadh had requested the possible purchase of up to 133 American M1A1/A2 Abrams tanks that would be configured to Saudi needs, plus another 20 to replace damaged tanks in their fleet.

The US State Department has approved the “possible” sale and notified Congress on Monday, the DSCA said.

Congress has 30 days to block the sale, though is unlikely to do so.

“This proposed sale will contribute to the foreign policy and national security of the United States by helping to improve the security of a strategic regional partner which has been and continues to be a leading contributor of political stability and economic progress in the Middle East,” the DSCA said in a statement.

“The addition of these tanks and recovery vehicles to the (Saudi military’s) inventory will enhance Saudi Arabia’s ability to support its soldiers in the field and to defend the Kingdom’s borders.”

The Pentagon announcement made no mention of the conflict in Yemen, where the Saudi-led coalition intervened in March last year after Shiite Huthi rebels and allied forces loyal to former president Ali Abdullah Saleh overran Sanaa.

Factory director Abdullah al-Aqel gave a higher toll of 16 killed and 10 wounded, adding that all the victims were workers.

The Al-Aqel factory, which makes potato chips and is near a military equipment maintenance center targeted in the raids, was struck during working hours, he added.

The UN says more than 6,400 people, mostly civilians, have been killed in Yemen since the coalition air campaign began last March.

The fighting has also driven 2.8 million people from their homes and left more than 80 percent of the population needing humanitarian aid.

Last November, the United States approved a $1.29 billion deal to replenish the Saudi air force’s arsenal, depleted by its bombing campaign in Yemen.