KATHLEEN de la Paz has broken a barrier in the local, male-dominated railroad sector by becoming the first female driver of the Light Rail Transit 1.

“It just makes me ecstatic knowing I can now drive LRT trains on my own,” said the 26-year-old De la Paz, who was presented to the media on Tuesday by officials of Light Rail Manila Corp. (LRMC), operator of LRT Line 1.

The mother of two is the only woman among the 29 newly hired LRT 1 drivers who had passed written and oral exams and physical training, including a 40-day course that focuses on technical competence, skills and aptitude, according to Rochelle Gamboa, LRMC corporate communications head.

As a child, De la Paz said, she developed both a liking for cooking and a fascination for motor vehicles. In college, she followed her passion for kitchen work and took up hotel and restaurant management in a school in Marikina City, where she also resides.

But later, she said, the engine roar in her heart made her consider a drastically different job. Her brother-in-law who drives a train for the Metro Rail Transit on Edsa gave her encouragement―and soon she was taking the prequalification exams given by the LMRC in line with its service improvement program.

“At first, I was nervous but it was great when they finally allowed me to drive on my own,” said De la Cruz, who hit the tracks earlier this month. “I liked seeing passengers smile every time they see me, a woman operating the trains.”

Gamboa said De la Paz was not the first female trainee or applicant encountered by the LRMC, but she was the first woman to meet the stringent requirements. The training program covered competencies in communication, incident and accident management, fault reporting, basic train driving and intervention, and hauling procedures―skill sets crucial in ensuring the safety of LRT 1’s 400,000 riders daily. 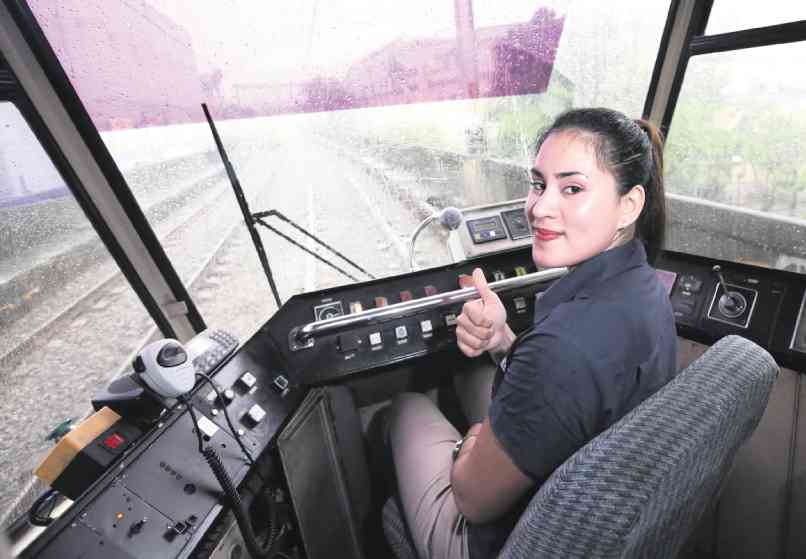 RAILROAD RARITY Kathleen de la Paz, a mother of two from Marikina City, eases into a male-dominated occupation as she takes control of an LRT1 train. The company operating the railway system presented her on Tuesday as proof that the tough job is “not gender-specific.” MARIANNE BERMUDEZ

De la Paz was part of the batch hired under LRMC’s Project Arangkada, wherein the company looked for additional drivers in preparation for an increase in the number of trips. The new hires raised the number of LRT 1 drivers to 146.

Arangkada involves other service upgrades that require an additional 105 tellers and 25 station supervisors, as well as the renovation of the elevators at the different stations. With a report from Faye Orellana