Duterte warns Sereno: Get out of my way or it's martial law | Inquirer News
Close
menu
search

Duterte warns Sereno: Get out of my way or it’s martial law

MANILA — In what could be a showdown between the two co-equal branches of government, President Duterte slammed Chief Justice Ma. Lourdes Sereno, on Tuesday, for insinuating that his decision to name “narco-judges” could lead to a constitutional crisis.

Speaking before the military in Cagayan de Oro City, the sharp-tongued Chief Executive also raised the possibility of him declaring martial law to pursue his administration’s violent drug war.

“I’m giving you a warning. Don’t create a crisis because I will order everybody in the executive department not to honor you,” the President said in a firm voice, referring to Sereno.

“Please do not, you say, create a constitutional issue. There will be. Don’t order me, I’m telling you. I hope you are listening,” he said. “You want me to be frank? You’re interfering (with my job).”

“Please, don’t order me. I’m not a fool. If this continues, (that) you’re tying to stop me, I might lose my cool. Or would you rather I declare martial law?” the President warned.

Mr. Duterte scoffed at the Chief Justice’s order to the judges mentioned in the President’s “narco list” not to yield to authorities until the issuance of a warrant of arrest against them.

Hinting that he would rather circumvent the tedious judicial process than allow drug suspects to go scot-free, he said the Chief Justice “must be joking” when she said that arrest warrants should first be issued against the judges.

The President also appeared to mix up the issue regarding the circumstances of some 600,000 drug suspects who had recently turned themselves in to the police.

Mr. Duterte was in Cagayan de Oro City to visit the Philippine Army’s 4th Infantry Division troops, especially those who were injured and killed during encounters with the New People’s Army (NPA) recently.

The President was reacting to Sereno’s statement that law enforcers must first secure warrants of arrest from judges before judges allow themselves to be “physically accountable to any police officer” as she warned of a constitutional crisis.

“You order me? I will not follow you,” the President said.

Mr. Duterte clarified that he did not order the police to arrest those judges on the list but had called on magistrates to show up at the Supreme Court, just as he enjoined police officers allegedly involved in the illegal drugs business to report to PNP Director General Ronald dela Rosa. 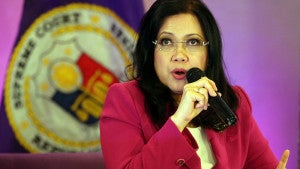 “What did I say? Judges (who are on the list) should report to the Supreme Court. I did not order them to be arrested,” he said, adding “I never accused anybody except to read their names.”

What he did when he read out the names of judges, police officers and local government officials who have connections with the illegal drug trade was “not an accusatorial utterance but rather it was in consonance with my duty as the President of the Philippines…”

He said securing a warrant of arrest against every Filipino involved in illegal drugs would take time even as crimes would surely be committed in the streets.

The President’s statements was a complete turnaround of his announcement on Monday night, when he said he would write back to Sereno to explain why he had to include the names of seven judges in the list of suspected drug lords or their coddlers.

“Susulatan ko rin. Out of respect also to the Supreme Court, I will answer (I will write back…),” Mr. Duterte said in a press conference in Davao City on Monday night.

The President had planned to tell the Chief Justice that his words were not “accusatorial.”

“It is not a criminal information. It’s just my word against the others because I have a duty to tell the public,” Mr. Duterte said.

The President said his intention in naming the judges, public officials and police officers involved in illegal drugs, was for people to know who were behind the problem.  SFM