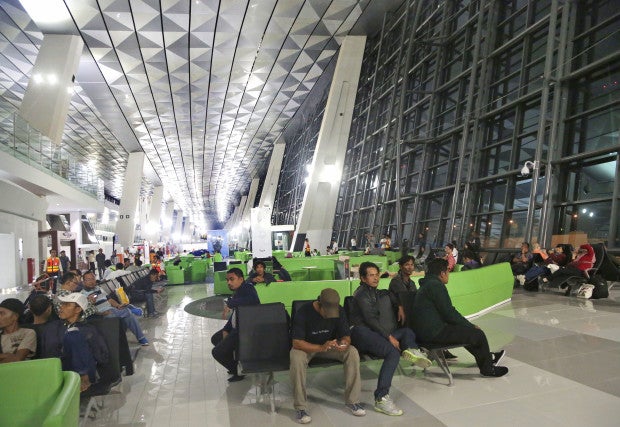 Passengers wait for their flights on the first day of operation of the new terminal of Soekarno-Hatta International Airport in Tangerang in the outskirt of Jakarta, Indonesia, early Tuesday, Aug. 9, 2016. The Indonesian capital’s airport opened its $560 million, steel and glass Terminal 3 Tuesday after years of operating at far above its passenger capacity. AP

The main airport serving the Indonesian capital Jakarta on Tuesday opened a new terminal that will allow the overcrowded aviation hub to handle tens of millions more passengers a year.

Air passenger numbers are soaring in Indonesia, the world’s biggest archipelago nation and Southeast Asia’s top economy, as a growing middle class increasingly chooses to fly but ageing infrastructure is struggling to keep up.

The $380 million terminal at Soekarno-Hatta International Airport, a vast, futuristic-looking structure, will be able to handle about 25 million passengers a year once fully operational by March next year.

The other three terminals at the country’s busiest airport are currently handling about 60 million passengers a year, way over their capacity.

Speaking at the terminal opening, Garuda chief executive Arif Wibowo hailed it as a “great milestone” that will help provide a better service for customers.

Eman Suherman, an Indonesian passenger at the terminal, said he was “proud” of the terminal, adding: “It’s beyond our expectations.”

The terminal will eventually be connected to central Jakarta, about 30 kilometers (18 miles) away, by a rail link.

There is currently no rail line between the airport and city center, leaving passengers facing monster traffic jams to get into Jakarta at busy times.

The terminal’s opening was delayed for more than a month after the government ordered alterations following the discovery that an important area was not visible from the air traffic control tower.

As well as ageing infrastructure, the Indonesian aviation sector faces problems with safety and has suffered a string of deadly crashes in recent years.