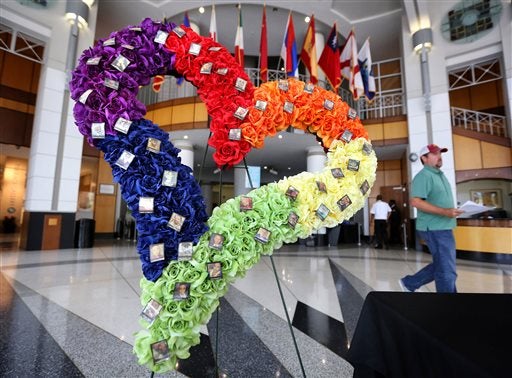 A heart-shaped wreath bears the 49 photos of the victims from the Pulse nightclub massacre, in the atrium of Orlando City Hall, Thursday, Aug. 4, 2016. The wreath was placed at city hall to raise continued awareness for the OneOrlando fund, to benefit the victims of the shootings and their families. (Joe Burbank/Orlando Sentinel via AP)

MIAMI—The 49 people who were killed in June in the Orlando gay nightclub massacre were struck by 200 bullets, local media reported Monday, quoting coroners.

The victims who died sustained 200 bullet wounds — without counting shots that hit the 53 injured people who survived, a report by the Orange County coroners’ office said, according to the Orlando Sentinel newspaper.

Reached by Agence France-Presse, the coroners’ office said it would release a full statement on Tuesday.

Lone gunman Omar Mateen — a 29-year-old American of Afghan descent — opened fire early on June 12 at about 2:00 am (0600 GMT) in the Pulse nightclub before taking hostages in a bathroom.

Three hours passed as he remained in contact with police negotiators, who blasted their way into the club around 5:00 am.

New York-born Mateen was ultimately killed in the crossfire.

Americans have reeled from a string of recent shootings, including the Orlando massacre — the deadliest mass shooting in modern US history — which was carried out by a man authorities say was radicalized online.

In Dallas, Texas, five police officers were killed in July in a sniper-style attack, while three officers were gunned down in Baton Rouge, Louisiana just days later.