IT WASN’T just gossip whispered to his ear.

Dela Rosa told reporters some of those named by Mr. Duterte in a televised speech shortly after midnight Sunday had started to submit themselves to PNP investigation.

He acknowledged errors in the list prepared following a meeting of representatives of the PNP, the Armed Forces of the Philippines and the Philippine Drug Enforcement Agency: One judge was found to be long dead.

One classified as a “congressman” was never a legislator. Of the four military personnel, retired Brig. Gen. Leoncio Daniega had already been dead since 2010, while the rest had already been long discharged from the service.

But Dela Rosa stressed: “It wasn’t just gossip whispered to the President … or [a list of] those who didn’t support [him] in the elections. The President is not that shallow.”

“Why are we so concerned about the mistakes? We should be concerned on the good effects of this massive campaign. If we allow ourselves to be controlled by the fear of making mistakes, by a small percentage, this campaign will go nowhere,” he said.

“To tell you frankly, we won’t be able to pin them down, because drug lords are very hard to pin down unless you have a comprehensive case buildup. But even if we don’t pin them down, and they keep on denying, at least the people know who they are, and they have promised to change,” Dela Rosa said.

Those who trooped to Camp Crame on Monday said they weren’t surrendering but simply wanted to clear their names.

Of the 58 who came, 31 were police officers and 27 were local government officials.

An emotional Mayor Martin de Guzman III of Bauang, La Union province, told Dela Rosa in the middle of a media scrum at Camp Crame’s multipurpose center: “The years we sent taking care of our name swiftly went away. The future of our children vanished. It is so sad. Who’s going to believe us now?” 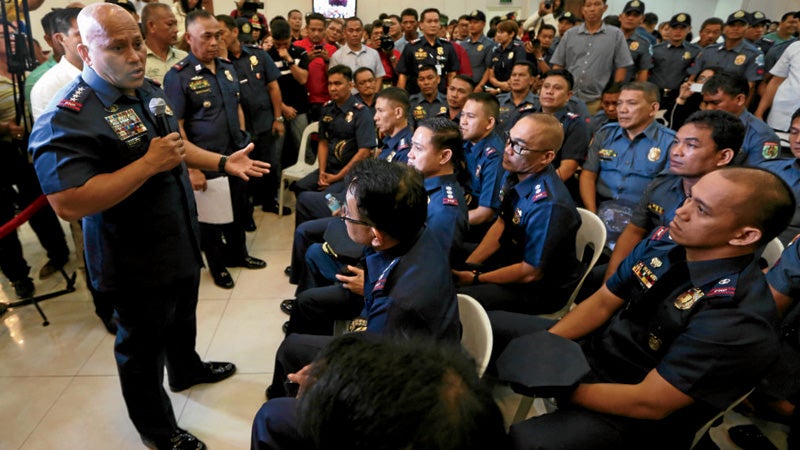 “Sir, you know me. We were best friends,” Montawal told Dela Rosa, who replied being friends didn’t matter in light of Duterte’s revelations, which “may be true or not true.”

“It’s the obligation of the President to let people know the campaign against narcotics is this sincere,” Dela Rosa explained.

One person who showed up wasn’t on the list. But by turning up, Franz Sabalones explained why his brother, Fralz, vice mayor of San Fernando, Cebu, may have been included in it.

When presented to the media, Sabalones said: “I just want to change.”

Dela Rosa, arm around him, cheerfully quipped: “Because if he doesn’t, he’ll really get killed.”

He described Sabalones as the No. 2 drug lord in Central Visayas, after Jeffrey “Jaguar” Diaz, who was killed earlier this year in an antinarcotics operation in Las Piñas City.

Vice Mayor Sabalones himself showed up. “I didn’t even know what he [Franz] does,” he said.

Dela Rosa met separately with his men who had been implicated, yelled at them and told them he would kill them.

The local government officials were referred to the Criminal Investigation and Detection Group for custodial investigation, while the officers will be investigated by the Internal Affairs Service.

Read Next
Did you know
EDITORS' PICK
vivo brings to the Philippines a powerful smartphone with a slimmer body, the vivo Y02s for only PHP 6,499
Palace: Biggest supermarkets in PH commit to sell sugar at P70 per kilo
What to watch out for when selecting a video surveillance solution
Heads may roll at BOC, says Palace if sugar smugglers are allowed to use recycled import permits
House energy committee chair Arroyo bats for cheap electricity
DOH reports increase in daily COVID-19 deaths, mostly unvaxxed
MOST READ
Brian Poe-Llamanzares receives his PhD in Public Administration
Metro Manila’s No. 1 wanted man arrested, says NCRPO
Alyssa Valdez to miss Creamline’s AVC Cup campaign
DepEd to give teachers P5K cash allowance within first week of classes
Don't miss out on the latest news and information.