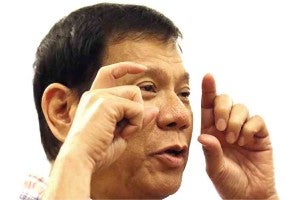 President Rodrigo Duterte forms a pair of binoculars with his hands and sets his sights on something. (INQUIRER FILE PHOTO/RAFFY LERMA)

CATBALOGAN CITY, Samar — The country’s rich who are not paying correct taxes will be the next target of President Duterte.

The Chief Executive issued this warning during his speech before the 500 soldiers of the 8th Infantry Division based at Camp Lukban in this city.

He threatened that they would be his next target by coming up with a list of the country’s biggest tax evaders.

Mr. Duterte was the first President to visit the main Army camp in Eastern Visayas, under the command of Major General Jet Velarmino.

He was joined by Defense Secretary Delfin Lorenzana, Armed Forces of the Philippines Chief of Staff Ricardo Visaya and retired Major General Arthur Tabaquero who was commanding general of the 8th ID from 2008 to 2010.

He immediately proceeded to the conference for a situation briefing.

He later met with the 500 soldiers and spoke for about 15 minutes, reiterating his desire to end the proliferation of the illegal drugs in the country.

The President said more than 600,000 drug users and pushers had surrendered since the campaign started.

He vowed that he would never back  down on this campaign.

In front of soldiers, President Duterte also reiterated his threat to call off the peace talks with communist insurgents if the armed group of the Communist of Party of the Philippines would continue using land mines.

The President hit the Communist Party of the Philippines-National Democratic Front (CPP-NDF) for using the Geneva Convention if it were in their favor while continued using land mines in targeting government troops.

“Do you want to fight another 45 years? We want peace,” Mr. Duterte said in his 15-minute speech.

He reiterated that he also wanted to see peace in the country for the benefit of the generations to come.

Earlier, Luis Jalandoni, chairman of the National Democratic Front of the Philippines (NDFP), the political wing of the Communist Party of the Philippines, that has been negotiating peace with the Philippine government, on behalf of the communist rebel forces, said the New People’s Army’s use of landmines has not been against international treaties.  SFM