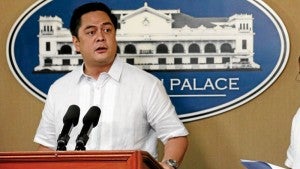 CAGAYAN DE ORO CITY –  The Duterte administration did not err in naming persons of interest linked to the illegal drug trade as the preparation of the list went through a very rigorous process, said Presidential Communications secretary Martin Andanar on Monday.

Andanar, who was here Monday, said the Philippine National Police and the Philippine Drug Enforcement Agency (PDEA) submitted to the President the list, which the agencies properly vetted to ensure that the chief executive would receive “topnotch” information.

“The PNP and PDEA have their own vetting process in writing down or including personalities in the drug watch list,” Andanar told reporters during a meet-and-greet with the local media at a hotel here Monday.

Andanar said if someone was listed as a drug pusher, said the PDEA would have to check and coordinate with different agencies and investigate before that person would be put on the list.

“It’s not easy to be included in the list (of) drug watch personalities, in the same way that it is hard for a person to be taken out of that list,” he explained.

In removing a person from the drug watch list due to death, for instance, he said, the family of that person should appear before the PDEA or PNP and present that person’s death certificate as proof.

Andanar claimed that the dead were included in the list because their families no longer bothered to go to law enforcement agencies to have their names taken out.

But Andanar did not say if the persons who were being monitored by the police on suspicion of drug ties were ever interviewed or invited for questioning and informed by the police or PDEA that they were suspected of drug trade involvement.  Andanar did not settle the question of whether those in the drug list could have known previously that that they were persons of interest on the drug watchlist and should therefore coordinate with the police to clear their names.

The move of the President to go public with the names on the list using the executive power of immunity, he said, has been “a masterstroke because now all these persons of interest— alleged drug lords, alleged drug coddlers, alleged drug protectors —will have to come out in the open, submit themselves for investigation with the PNP to clear their names out of that list and they will have to go through that process.”

“It has never been done in the history of this country, and we have to give it to our President who understands the power that he has to stop the drug proliferation that is destroying the lives of more than three million Filipinos,” he said.

Andanar said the list has long been in existence during the past presidencies, but was revealed for the first time last Sunday, by President Duterte, in line with the priority he has given to the anti-drug campaign and his solid commitment to ensure its success.  SFM