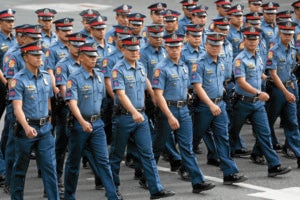 DAVAO CITY – A junior police officer assigned in Davao del Norte who has been named by President Duterte as among those who were involved in illegal drugs was disarmed and relieved from his post, the Southern Mindanao regional police office, said on Monday.

Senior Insp. Martin Plaza was placed under “restrictive custody” and his lifestyle put under scrutiny, according to Chief Insp. Andrea dela Cerna, Southern Mindanao police regional spokesperson, after his name was among those read by Mr. Duterte as being involved in illegal drugs on Sunday.

Plaza, the erstwhile deputy chief of police in the upland town of Talaingod, Davao del Norte, was the highest ranking police officer from Duterte’s hometown region, included in the list.

“His locker/office was searched (for drugs) but turned negative,” she added.

Two operators from the Criminal Investigation and Detection Group (CIDG) assigned in the region, identified as Senior Police Officers 3 Ritchie Mat and Rosell Ilievera — who were assigned in Mati City, Davao Oriental and Tagum City, respectively — were directed to report to their mother unit in Manila on Monday, Dela Cerna said.

PO3 Filemeno Toronio died of cardiac arrest while still being assigned in Mati City in 2013, she said.

“Search for Police Officer 3 Balabag is on-going. We are requesting the public to share any information regarding (his) whereabouts and report it to the nearest police station,” she said.  SFM/rga