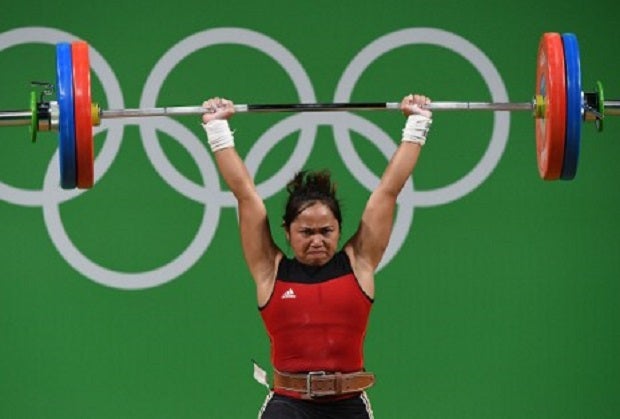 The Philippines’ Hidilyn Diaz competes during the women’s 53kg weightlifting event at the Rio 2016 Olympic games in Rio de Janeiro on August 7, 2016. Diaz won silver in the event, ending a 20-year medal drought for the Philippines in the Olympics. AFP

Senators on Monday praised Hidilyn Diaz for ending the country’s 20-year Olympic medal drought, hailing her as a symbol of the Filipino’s strength.

Diaz clinched the silver medal at the women’s 53-kg weightlifting competition at the Rio Games on Sunday, becoming the first Filipino to win a medal since boxer Onyok Velasco’s 1996 win.

“I am one with the whole country in sending our recognition for the victory of our compatriot Hidilyn Diaz. We thank Ms. Diaz and the Lord that the Philippines’ 20-year wait for another Olympic medal has ended,” said Sen. Nancy Binay in a statement.

“We also consider Ms. Diaz’s victory as a victory of women, as she is the first Filipina to win an Olympic medal. She symbolizes the prowess and determination that the Filipino shows in any challenges,” she said in Filipino.

Sen. Grace Poe said Diaz’s victory brings honor to the whole country, tweeting: “You are a symbol of the resilience and strength of the Filipino”

“Congratulations Hidilyn Diaz for winning the silver medal in Rio, Brazil. We are very happy that you brought honor to our country. I’m so proud of you. The country is so proud of you,” Pacquiao said in a 23-second video.