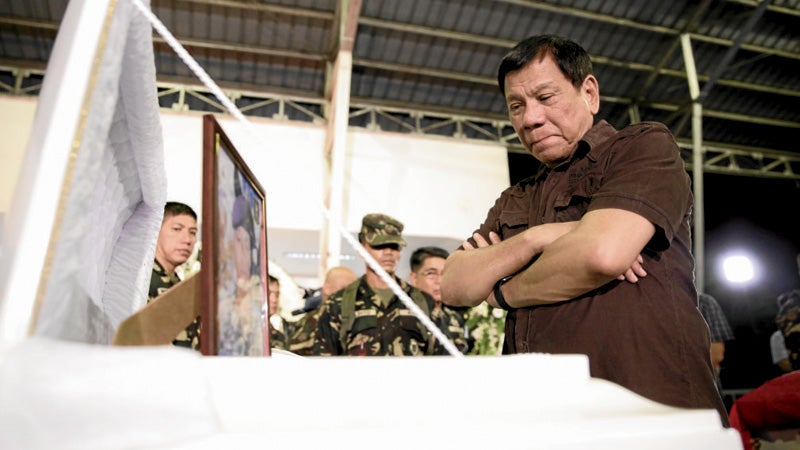 PRESIDENT Duterte pays his respects at thewake of one of the four soldiers killed by the NPA. MALACAÑANGPHOTO

DAVAO CITY—President Duterte on Sunday threatened to call off the peace talks with communist rebels scheduled to resume in Oslo, Norway, in a few weeks if they continued to use land mines in their war against the government.

“You better decide now, tonight. I’m here in Davao. Decide now whether you want to continue using land mines and if you say ‘yes,’ I will also order the Armed Forces [of the Philippines] to use ordnance. That would be fair enough,” he said at the wake of four soldiers in Camp Panacan here.

The President issued the call after the New People’s Army (NPA), armed wing of the Communist Party of the Philippines, detonated a bomb that killed the four soldiers and wounded several others in Compostela Valley last week.

He said the use of explosives by the rebels was lamentable as it maimed not only combatants but also civilians, such as the families of soldiers riding in military trucks on their way back to camp or to other destinations.

“What if I would also order the Armed Forces to use land mines against you. Which is which? It cannot be a different rule here for you or the armed forces. It should be even. What if I tell them to start using land mines for offensive or defensive purposes?” he said.

‘Let’s all suffer’
“Why should soldiers be the only ones to suffer? Let us all suffer,” he added.

Mr. Duterte said he did not care if the war with the communist rebels dragged on for another 45 years if they continued to choose violence.

The President said he wanted to talk peace, which was why he was calling on the rebels to stop using land mines.

Invoking the Geneva Convention on the conduct of war, the President said the use of land mines, or bombs concealed under or above ground, by entities engaged in armed conflict was prohibited by the international agreement.

Not complete ban
However, the “Convention on the Prohibition of the Use, Stockpiling, Production and Transfer of Anti-Personnel Mines and on their Destruction,” also known as the “Ottawa Treaty,” shows that it does not completely ban land mines.

Mr. Duterte assailed the communist rebels and their supporters for arbitrarily citing the Geneva Convention “if it is to your advantage.”

“You are the very first to cry foul when something goes wrong even in the handling of prisoners… I cannot understand for the life of me that if it is to your advantage, you invoke the Geneva Convention provisions,” he said.

The President said the peace talks could not continue while the rebels maimed soldiers and civilians with explosives.

“So what do you want? Either you stop it now or I’m ordering the (government peace panel) to come home,” he said.

The President said he would give the fund meant for the government peace panel to the military instead. “I’ll tell the military to buy a shipload of explosives.”

He said if the fight with the communists continued, he would approve the request of the Department of National Defense to recruit 20,000 additional troops.

The President said war was ugly, “that’s why we are talking,” and that it should not be used to further an ideology. “I can be a communist party member but I will never go to war.”