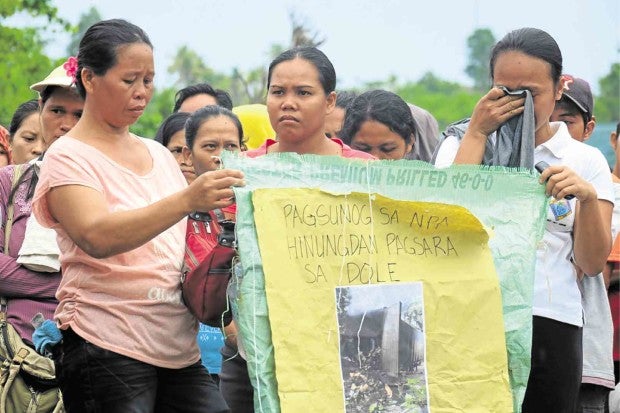 A WOMAN employee of Stanfilco weeps after learning of the company decision to close shop following attacks by communist guerrillas. CHRIS PANGANIBAN/INQUIRER MINDANAO

BAROBO, Surigao del Sur—Multinational banana firm Dole-Stanfilco has decided to shut down its operation here and in nearby Tagbina town following a series of attacks by suspected New People’s Army (NPA) rebels, which targeted its container trucks.

The company employed over 1,500 workers on its 400-hectare plantation.

Dole-Stanfilco has already sent a notice to the Caraga regional office of the Department of Labor and Employment that it was indefinitely shutting down its operations starting on Tuesday.

The company said it could no longer afford to incur losses because of the NPA attacks, which came after it continuously refused to pay revolutionary tax.

Dole-Stanfilco said the escalation of the attacks, including the burning of container trucks that transport bananas to Davao City where it will be transported for export to other countries, has already cost the company at least P20 million in losses.

The latest attack happened a few days ago, when NPA rebels blasted a truck with explosives.

This year, Dole-Stanfilco said it lost seven trucks already. From 2010, the rebels had burned a total of 19 trucks, the company said.

The displaced workers held a march-rally here early this week and denounced the NPA’s attacks that caused the closure of the company.

The protesters, many of them contractual farm workers, asked what would happen to their families now that they have lost their jobs.

“Where now are their claims that they are soldiers of the masses that will look after our welfare? We are here not to fight with arms but to condemn the extortion activities of the NPAs which cost our livelihood,” said Concepcion Jumao-as, who spoke at the rally.

Jumao-as said company officials have told them the NPA’s use of powerful explosives that burned the two trucks carrying the container vans was the main reason for the company decision to shut down its operations.

“Before, they use gasoline in torching the trucks but lately they already use bombs,” she said. Chris Panganiban, Inquirer Mindanao