Prelate on Laguna Lake: It will die 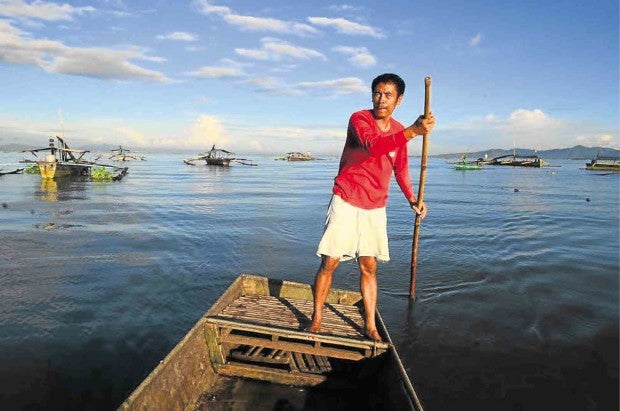 LAGUNA Lake, the country’s largest body of freshwater, is dying due to heavy pollution and siltation attributed to wastes generated by lakeshore industries and communities. Church leaders likened the lake’s slow death to the murder of innocent people. The task of keeping the lake alive, however, rests not solely on the government but on people themselves, said organizers of an event aimed at raising awareness on the lake’s condition. AL BENAVENTE/CONTRIBUTOR

CALAMBA CITY—Likening the slow death of Laguna Lake to murder, especially of innocent people, Catholic Church leaders and government officials have appealed to residents in lakeside communities and industries to do their share to save what remains of the crucial body of water.

In a gathering in this city last week, retired Manila Archbishop Gaudencio Cardinal Rosales said it is the duty of everyone to take care of the lake by not contributing to its death.

“Time will come, that if Laguna Lake is not preserved and protected, it will no longer serve life. It will die. It will be killed,” said Rosales in his homily during a Mass here.

The Mass was celebrated as part of an activity to call attention to the condition of the biggest freshwater lake in the country that covers communities in the provinces of Laguna and Rizal, and Metro Manila. More than 4,000 people, including government officials and workers, students and priests, attended the event.

Fr. Robert Reyes, the “running priest” who is also an environmental advocate, challenged the crowd to be involved in efforts to save Laguna Lake from extinction.

Reyes, citing accounts of scientists, said the lake had become heavily silted and polluted. Fish pens also crowd the lake, leaving little fishing ground to small fishermen who still depend on the lake to survive.

“Worse than a marshland, Laguna Lake would become a  ‘Smokey Mountain’ in the future because of the continuous flow of dirt and wastes,” he said.

“Owners of private corporations and industries are the real pests in our environment because [they] exploit and destroy nature just for money without due regard for its protection and sustainability,” he said.

Lawyer Ipat Luna, who represented Environment Secretary Gina Lopez in the activity, urged those who attended the event to help in protecting the dying lake.

She said residents could do their share in saving Laguna Lake by ensuring that their wastes do not reach the lake.

“[Let us nurture] watersheds to protect the lake and the environment,” she said.

Mayor Cesar Perez, of Los Baños town, urged people to cooperate in efforts to save the lake by not  using it as a septic tank.

He said people should dispose of their wastes properly and stop dumping these on canals and rivers that flow into the lake.

Participants from other parishes in northern communities in the cities of San Pedro, Biñan, Sta. Rosa and Cabuyao joined a fluvial procession toward the gathering’s venue at Pantalan ng Aplaya (Port of Aplaya) here.