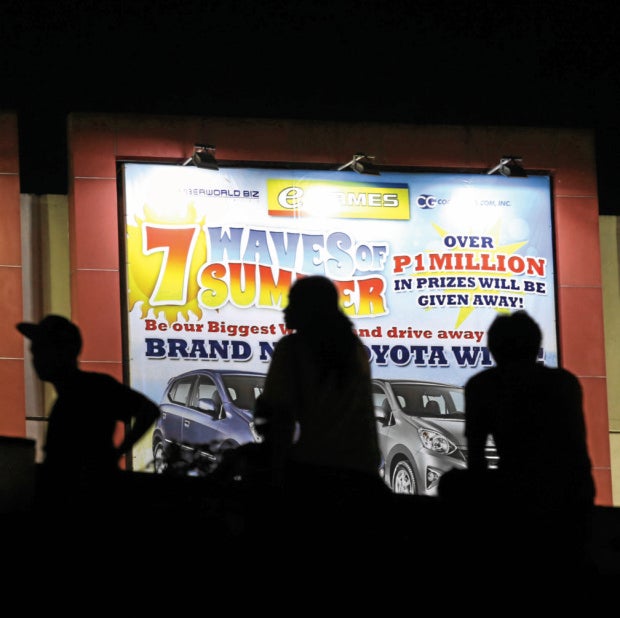 GAMBLERS’ CORNER E-games are advertised by a mall in Pasig City. INQUIRER PHOTO

Businessman Roberto V. Ongpin on Thursday stepped down as chair and director of gaming firm Philweb Corp. following President  Duterte’s threat to bring down “oligarchs” while pinpointing him as a prime example.

Ongpin quit his posts in Philweb and all subsidiaries effective immediately, based on his brief resignation letter submitted to the Philweb board on Thursday, a copy of which was disclosed to the Philippine Stock Exchange.

Mr. Duterte earlier identified Ongpin as a prime example of an oligarch, which refers to a member of a small group of people who wield economic and political power.

Oligarchs are the latest addition to a growing list of targets that Mr. Duterte is pursuing. The firebrand former prosecutor has said he will crack down on drug dealers, crime bosses, corrupt generals, business monopolies, online gambling and even Catholic priests.

“I am fighting a monster… Believe me, I will destroy their clutches in our nation,” Mr. Duterte said at an environment summit in Davao City on Thursday, without identifying anyone.

On Wednesday night, the President threatened to take on the oligarchs, naming Ongpin as an example. “My plan, my order … is: ‘Destroy the oligarchs [who] are embedded in government now,’” he said in Malacañang.

On Thursday, shares of Philweb slid by 36.88 percent following the President’s pronouncement.

According to its website, Philweb generated P531 billion in gross bets in the last five years.

The license it obtained in 2003 from state-controlled Philippine Amusement and Gaming Corp. (Pagcor) to operate e-Games is at risk given Mr. Duterte’s strong stance against e-gaming.

Ongpin has stepped down to focus on real estate projects developed by Alphaland Corp., where Ongpin has a majority stake, Philweb said on Thursday.

Mr. Duterte noted that Ongpin kept his influence and hold on power throughout several administrations.

Ongpin was a trade minister during the Marcos regime and a “hanger on” during the Ramos, Arroyo and Aquino administrations, Mr. Duterte said.

“These are the guys, who, while sitting inside their planes or their mansions everywhere, are raking in money like taxi meters,” Mr. Duterte said of the oligarchs on Wednesday.

In Davao City, the President said he would “destroy the clutches” of the oligarchs even as he vowed to pursue federalism.

Duterte said that for a long time, people in Mindanao and other parts of the country had been at the mercy of the policies and decisions that emanated from Manila.

He said the oligarchs, who benefited from the system, would continue to resist change.

“They will say, ‘It’s not viable.’ They will distribute the power and the goodies only to the rich. That’s why they are resisting. They really do not want it because it will destroy the power vortex,” the President said.

“That is why I am so passionate about getting into a new setup, because  ‘imperial Manila’ controls everything,” he said. “Under the unitary type of government, all permits are released by  Manila.”

Even the mines go to the oligarchs, who are good at influence-peddling, Mr. Duterte said.

“They are not into planting. They are into open pit mining. Others left behind big holes,” Duterte said.

But Duterte said not all the rich were bad. “Look at Gina, she is a billionaire but look at how she brings herself,” he said, referring to Environment Secretary Gina Lopez. “She is an advocate.”

He said logging like mining was a sunset industry. “Logging is already too late; if there’s 24 hours in a day, logging is already in the 25th hour. We cannot back (the two industries) anymore,” he said.

“Many will get angry. Many will like the status quo to remain, but we will open opportunities to all Filipinos,” he said.  With  reports from Germelina Lacorte, Inquirer Mindanao