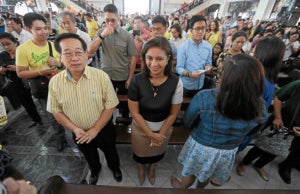 Lacierda called on the 14.4 million Filipinos who voted for the Vice President to come together anew to help her, after Robredo admitted that the legal fees have been worrying her more than the merits of the case filed by Marcos as she believed the latter’s accusation was “baseless.”

Lacierda started the #PisoParaKayLeni in the early morning and has since been shared 1,115 times.

“Our job to help her is not over. So many of us voted for her to be our Vice President. She has come to a crossroad early in her Vice Presidency. She needs our help to pay for her legal defense,” Lacierda wrote.

“Even if the legal services were provided for free, there will still be costs for the preparation of documents and evidences,” Lacierda, also a lawyer said.

Robredo’s spokesperson, Georgina Hernandez, said in a statement the “Vice President is truly grateful for this expression of concern.”

“Nonetheless, we would not want to impose on the people. We continue to have faith that in the end, the good would prevail,” Hernandez said.

The comments on Lacierda’s Facebook posts were varied, from those who were eager to help to those who accused Robredo of lying about being unable to pay for the legal fees.

Lacierda told the Philippine Daily Inquirer that he has received several messages, many of whom offering to help Robredo. One wanted to donate P3,000, he said.

On opinions of other lawyers that Robredo could not accept donations being the Vice President, Lacierda believes the campaign does not violate the law.

“The law presumes that the gift is given in consideration for a favor to be granted in connection to the public official’s duties. First, one peso is a nominal amount. Second, what favors will be granted to the Filipino donors, other than the psychic reward of ensuring there are enough funds to cover the costs of legal defense, assuming legal services services are provided pro bono. Third, what official duties will be compromised in return for that nominal donation of P1. These will be by and large anonymous donations by citizens who believe that VP Leni won the VP race and must be given an adequate measure to cover her legal defense,” Lacierda said.

Hernandez said the Vice President’s legal team “is aware that the VP cannot accept donations and thus, the team is looking into it.” SFM