‘Thou shalt not kill’ tarps on display at Bacolod cathedral 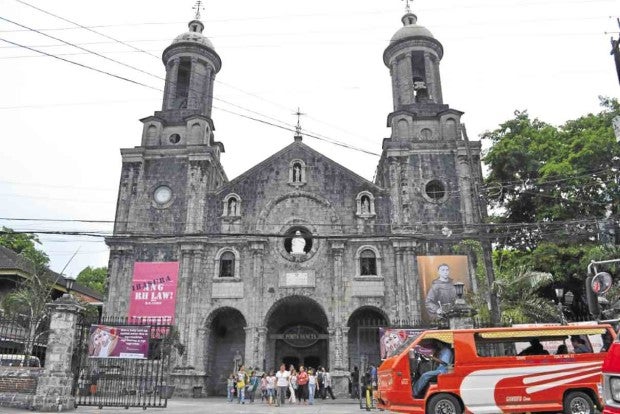 BACOLOD CITY, Negros Occidental — The Diocese of Bacolod has unfurled new tarpaulins condemning extrajudicial killings of drug trade suspects and has announced it will ask the parishes within its jurisdiction to hold a regular collection during masses to raise funds for the rehabilitation of drug suspects who have surrendered to the police.

Starting Thursday, the tarpaulins with the message “Thou shalt not kill” are displayed in front of the San Sebastian Cathedral, the seat of the Bacolod Diocese here.

Fr. Felix Pasquin, rector of the San Sebastian Cathedral, said the tarpaulin would clearly convey the Church position against vigilantism in the same way that it showed its opposition to reproductive health law when it hanged its famous “Team Patay, Team Buhay” (Team Death, Team Life) tarpaulin.

The “Team Patay, Team Buhay” tarpaulin listed down the names of senatorial candidates in 2013 elections who were in favor of or opposed to the reproductive health law.

The Supreme Court last year ruled in favor of the Diocese of Bacolod that caught the ire of the Commission on Elections for posting the tarpaulins.

This time, the Diocese of Bacolod is again standing up for the sacredness of human life, amid the mounting killings in President Rodrigo Duterte’s war against crimes, according to Pasquin.

The messages of the tarpaulins are as follows: “Thou shalt not kill…drugs kill…crimes kill…corruption and poverty kill…abortion is killing…summary execution is killing. Life is sacred.”

Pasquin said the tarpaulins did not single out any person or group for censure, but condemned all forms of killing against the teachings of Christ.

“We are in favor of the campaign against drugs, but are taking a strong stand against the rampant extrajudicial killings of drug suspects,” Pasquin said.

The Church would also oppose the restoration of the death penalty based on moral principles and God’s commandment, he said, adding that “life is sacred and precious because it comes from God.”

He said priests in the Diocese of Bacolod have taken to the pulpit to express alarm over the rising number of killings and the need to value life in consonance with the sixth commandment – “Thou shalt not kill.”

The “Thou shalt not kill” tarpaulins are meant to catechize the people on the sin of killing as forbidden by God, according to Pasquin.

“While law enforcers’ killing in self defense is legitimate and accepted in the moral theology of the Church, how do we determine if the claim of self defense is true?” he said.

Pasquin said they received reports of vigilantism, and drug trade leaders killing their own people to prevent them from surrendering to the police and confessing amid the government’s intensified war on drugs.

“Killing comes from the mouth of the President. Every time he speaks he says ‘I will kill you,’ that has become part of our culture,” Pasquin said.

He stressed that the offender should be given a chance to reform and convert.

But no reform and conversion could happen in the killing spree apparently being encouraged by government, said Pasquin.

Pasquin said the Catholic church would help government in the rehabilitation of surrendered drug users, especially in the aspect of spiritual formation.

He said parishes in the Diocese of Bacolod would hold a regular recollection to raise funds for the rehabilitation of drug suspects.

Spiritual formation is the most important aspect of rehabilitation, according to Paquin.  SFM