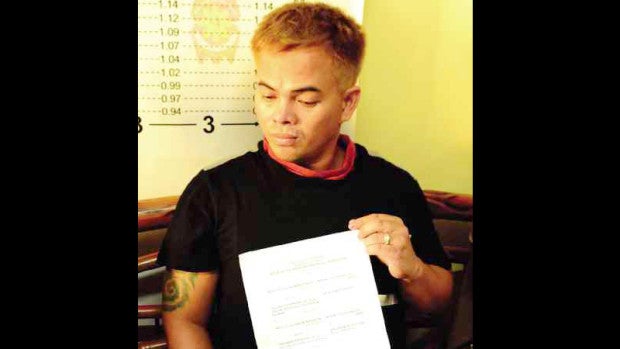 Rolando “Kerwin” Espinosa Jr. was first recruited as a police asset and later rose to become a notorious drug lord in Eastern Visayas, raking in P300 million a month from his narcotics trade supplied from China, according to a police intelligence report submitted to President Duterte.

The report, a copy of which was furnished the Inquirer, said Kerwin, son of Mayor Rolando Espinosa Sr. of Albuera, Leyte province, was enlisted in the campaign against illegal drugs when Chief Supt. Vicente Loot was head of the  Regional Anti-Narcotics Unit.

“I do not know him from Adam. I do not know him personally but I know his name and his links to illegal drug syndicates and, in fact, the arrest warrant against him was worked out during my time in Region 8 when I was transferred there in August of 2011,” Loot told the Inquirer.

The report named Loot and several other Philippine National Police officials as the handler of Kerwin, who disappeared from his Albuera home before the election of President Duterte, who has vowed to eliminate the drug menace in three to six months.

Kerwin ostensibly became a vital asset in the antinarcotics campaign because he was able to identify people involved in the illegal drug trade, according to the report.

Kerwin was later used to recycle confiscated narcotics back to the market.

The PNP officer who provided the Inquirer with a copy of the intelligence report on the matrix of the illegal drug operation in the country said Kerwin remained an asset in the Police Region 7 Office  after Loot was promoted as head of personnel in the area.

The officer described Kerwin as a “shared asset” of Loot and another senior PNP official.

The Inquirer sought and failed to get the comment of the other PNP official, who likewise has retired and is named in the report dated May 31.

Loot told the Inquirer that even early on when he was in the active service, he was aware of the existence of an intelligence report linking him as protector of the “Kerwin Espinosa Drug Syndicate.”

“In 2013, there was even a fake complaint against me allegedly written by Rep. Lucy Torres-Gomez linking me to Espinosa but the congresswoman clarified then that she did not write such a letter or complaint,” Loot said.

In the course of his activities as police asset, Kerwin was introduced to Jeffrey “Jaguar” Diaz, identified as a top drug lord  who was killed in Barangay Almanza 1 in Las Piñas City on June 17 by joint operatives from Cebu province and Las Piñas.

The link between the retired official and Diaz led to a change of assignment for Kerwin.

“He went on his own and became the biggest drug supplier and distributor in the entire Eastern Visayas,” said the police source, who spoke on condition of anonymity.

The source said that aside from the money from Diaz, the proceeds from Kerwin also flowed to top PNP officials.

Camotes Island was identified as the pickup point for  illegal drugs distributed by Kerwin.

The pickup and distribution was done  weekly  with 42-50 kilos a week, or about 200 kilos a month, with an estimated value of P300 million a month.

The supply of “shabu” came from mainland China through Peter Co, who continued to operate the biggest illegal drug syndicate in the country through various distributors from the maximum security compound of New Bilibid Prison.

This is the reason why it was easy for Kerwin to finance his father’s electoral bid in May. The father won the mayoral race in Albuera.

In the May elections, the preelection money spent by Kerwin for his father’s mayoral bid was estimated at P60 million. During election week, the son shelled out another P40 million, ensuring victory for his father in a municipality with only 24,000 registered voters.

Mayor Espinosa was among 32 local executives mentioned as protectors and distributors of shabu (methamphetamine hydrochloride) in the country.

Kerwin was also able to build and organize his own private army with at least 100  .45 cal. and 9mm pistols plus more than 50 rifles.

On July 28, two bodyguards of Mayor Espinosa were arrested during a buy-bust operation at a tennis court near his house in Sitio Tinago, Barangay Benolho, in Albuera.

On March 5, 2015, Kerwin was arrested in Tacloban City by police agents in connection with his illegal drug operation but was later released without charges.

The intelligence report said among his visitors while under detention was Loot.

“They will do anything to link me to Kerwin but as I have said before when President Duterte named me as one of those linked to illegal drug syndicates, I am innocent and I am ready to face any investigation,” Loot said.