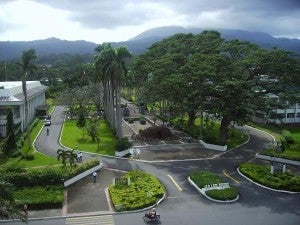 LOS BAÑOS, Laguna – University of the Philippines Los Baños students seeking the junking of the Student Academic Information System (SAIS) and eUP forcefully entered the main library building in an attempt to enter the office of the chancellor on Wednesday afternoon.

A few students and community support brigade personnel were slightly injured in the forceful entry.

Students were demanding a dialogue with eUP Project Director and UP Assistant Vice President Jaime Caro regarding their concerns. They had been chanting “Junk SAIS” since the beginning of the protest before 3 p.m.

The students gathered first at the Student Union Building before proceeding to the library.

As of this posting on Wednesday evening, students were still holding their protest along the corridor while UP police and community support brigade were guarding the door to the chancellor’s office.

Students camped out Saturday night at the UPLB campus to access SAIS, which was said to have experienced “service attacks,” causing delays in registration.  SFM