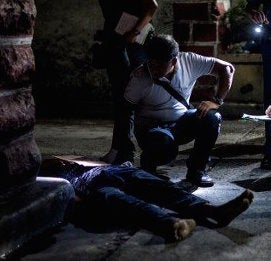 The Cavite police, in a report on Wednesday, said the unidentified man had several bullet wounds. His hands and legs were tied with a plastic straw. A note left on the body read, “Pusher ako (I am a drug pusher).”

Police said the body was discovered at 5:30 a.m. Tuesday in Barangay Salawag.

Police also recovered a sachet of suspected “shabu” (methamphetamine hydrochloride) from the victim, who was wearing a blue sleeveless shirt and a pair of black shorts.  SFM