Mayor in Russia sent to prison for corruption 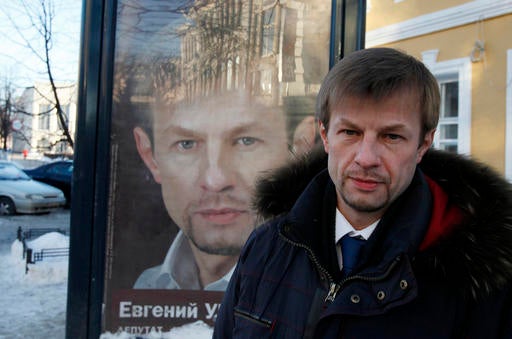 In this Jan. 24, 2012 file photo Yevgeny Urlashov stands in front of his mayoral campaign poster in downtown Yaroslavl, city of about 590,000 some 250 kilometers (150 miles) east of Moscow, Russia. The mayor of the Russian city of Yaroslavl has been found guilty of soliciting bribes and sentenced to 12 and a half years in a high-security prison, on Wednesday, Aug. 3, 2016, an unusually harsh verdict. AP

MOSCOW — The mayor of the Russian city of Yaroslavl has been found guilty of soliciting bribes and sentenced to 12½ years in a high-security prison, an unusually harsh verdict.

When he was arrested in 2013 Yevgeny Urlashov was the only opposition mayor of a major Russian city, elected a year earlier on a wave of opposition protests.

Two of Urlashov’s aides also stood trial: one was found guilty of helping to arrange the bribe and sentenced to 7 years in prison and the other was acquitted.

Urlashov pleaded not guilty to the charges and claimed that he had been framed by his political rivals. TVJ