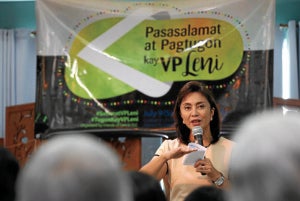 MANILA —  Vice President Leni Robredo prefers a constitutional convention (Con-con) for charter change but has said she understands why President Duterte has changed his mind and is now pushing for a constituent assembly (Con-ass).

“To me, ideally, I go for a Con-con but I also understand the reservations of our President because a Con-con would require a big budget for the entire process,” Robredo said at a press conference on Wednesday.

She said a Con-con would be the ideal set-up if the country wants people participation in the process of amending or revising the 1987 Constitution.

It would also allow Congress to concentrate on its job as the senators and congressmen would not have to sit anymore as a constituent assembly, Robredo, a former district representative, said.

“But again, we understand the balancing act. There is the ideal but it might be too costly for government. I still prefer a Con-con but I am open to discussion because of the budget (concerns),” Robredo said.  SFM