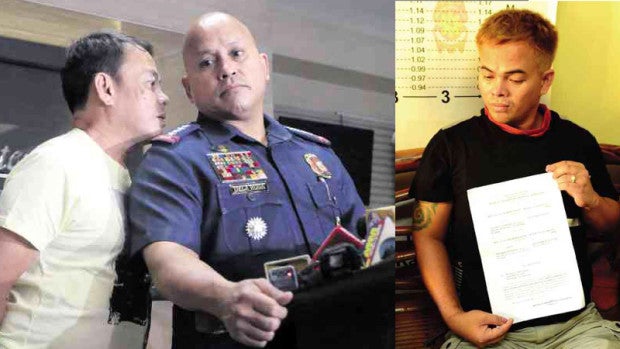 “I was really afraid of the shoot-on-sight order. I still want to live.”

Mayor Rolando Espinosa Sr. of the small town of Albuera in Leyte province on Tuesday beat a 24-hour deadline set by President Duterte for him and his son, Kerwin, to surrender or die for their alleged involvement in illegal drugs.

Philippine National Police Director General Ronald dela Rosa said Espinosa would live unless it was found that he had lied and is protecting his son, an alleged notorious drug lord in Eastern Visayas who is still at large.

Dela Rosa asked Espinosa, “If he won’t surrender, we will kill him, OK?” Espinosa replied, “OK.”

Wearing a yellow T-shirt, Espinosa was presented by Dela Rosa to reporters after the mayor’s surrender.

Espinosa, accompanied by a lawyer and a public prosecutor, went to Camp Crame as early as 7 a.m. on Monday after learning about the 24-hour ultimatum.

Dela Rosa said he had wanted Espinosa and his son to give themselves up  but decided to receive the mayor alone  around 4 a.m. on Tuesday.

The mayor said the police could kill Kerwin after he defied Mr. Duterte’s deadline, which was announced on Monday night, to give himself up or be shot on sight.

“If you are still here in the Philippines, if you are listening, Kerwin, you better surrender or die,” Dela Rosa said.

He said there were “unvalidated” reports that Kerwin had left the country. Espinosa said his son had a face-lift a few months ago in an apparent attempt to disguise himself.

“We will continue the manhunt for Kerwin, to make sure he can’t continue destroying the lives of hundreds of Filipinos in Eastern Visayas,” Dela Rosa said.

Since there was no pending arrest warrant against Espinosa and despite the “preponderance of intelligence reports” that he was protecting his son or getting campaign funds from him, Dela Rosa said he would give the mayor the benefit of the doubt and would allow him to go back to Albuera.

Dela Rosa, however, told Espinosa, “there will be a place for you,” if he found out that the mayor was lying.

The PNP chief also made the mayor promise to rid his town of illegal drugs within two months.

“There will be zero tolerance [of drugs]. All of them,” the mayor said, referring to those engaged in using and selling drugs.

“He will do what he can to clean up his town. He will cooperate,” Dela Rosa added.

Espinosa said he last met his son in October last year and talked about his involvement in illegal drugs. “I warned him about it. But he has his own decision to make. He is an adult already, he has his own mind.”

The mayor denied receiving campaign funds from his son. Espinosa said his other family members were well-off and lived in the United States and he got contributions from them.

At the press conference, Espinosa confirmed to Dela Rosa that one of his son’s suppliers was Peter Co, one of the convicted drug lords detained at the New Bilibid Prison in Muntinlupa City.

He disclosed that the drugs from a ship seized by law enforcers in Subic, Zambales province, last month turned out to be consigned to another drug lord detained at the Davao Penal Farm.

The PNP chief also said Espinosa’s name was among the “numerous” incumbent and former local executives such as mayors, governors and congressmen mentioned to him by President Duterte as being involved in illegal drugs or are protecting and receiving money from drug syndicates.

On Monday, the President warned that if the Espinosas would not surrender within the deadline, “an order of shoot on sight would be given if they resisted and endangered the lives of arresting police officers.”

Earlier, two bodyguards and three employees of the mayor were arrested during a police buy-bust operation that netted at least P1.9 million worth of “shabu,” a slang term for the drug methamphetamine hydrochloride.

Reports said four others eluded capture after they went inside Kerwin’s house and locked the gate.

The war on illegal drugs has been the centerpiece of the Duterte administration campaign promise of radical change. The President has repeatedly said he would eliminate drugs, criminality and corruption in  six months of his presidency, receiving a resounding mandate in the May elections.

The campaign has also left a bloody trail with the deaths of hundreds of drug suspects in vigilante-style killings and in supposed shootouts with law enforcers.

The body count has drawn concern from human rights groups, who said the rule of law and due process must still prevail.